Environmentalism: a new religion for the new world order

Gore family ties The connections between the late industrialist and Soviet agent Armand Hammer and the Gore family run long and deep — and they continue to haunt Al Gore Jr.

* Lenin presented an inscribed portrait to « Comrade Armand Hammer » in 1921, The inscription has Lenin in parentheses & Ulanioff, his birth name. 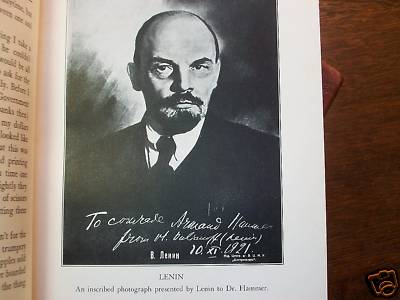 Trotsky, Stalin and the Cold War: The Historic Implications and Continuing Ramifications of the Trotsky-Stalin Conflict. By Kerry Bolton
(…)Armand Hammer, head of Occidental Petroleum, son of the aforementioned Dr Julius Hammer who had been the Trotsky family’s host in New York, was a globetrotting plutocrat who mixed with the political and business elites of the world for decades. Hammer was in intimate contact with every Soviet leader from Lenin to Gorbachev — except for Stalin.[18] This omission is indicative of the rift that had occurred between the USSR and Western financial and industrial interests with the assumption of Stalin and the defeat of Trotsky.
The CFR report on the USSR that advised American business to get in quick before the situation changed, was prescient. In 1921 Hammer was in the USSR sewing up business deals. Hammer met Trotsky, who asked him whether ‘financial circles in the USA regard Russia as a desirable field of investment?’ Trotsky continued:
Inasmuch as Russia had its Revolution, capital was really safer there than anywhere else because, ‘whatever should happen abroad, the Soviet would adhere to any agreements it might make. Suppose one of your Americans invests money in Russia. When the Revolution comes to America, his property will of course be nationalised, but his agreement with us will hold good and he will thus be in a much more favourable position than the rest of his fellow capitalists.’[19] In contrast to the obliging Trotsky who was willing to guarantee the wealth and investments of Big Business, Hammer said of Stalin:
I never met Stalin and I never had any dealing with him. However it was perfectly clear to me in 1930 that Stalin was not a man with whom you could do business. Stalin believed that the state was capable of running everything, without the support of foreign concessionaires and private enterprise. That was the main reason why I left Moscow: I could see that I would soon be unable to do business there…[20]

FLASHBACK: Gore Made $500K from Toxic Zinc Mines
Al Gore, Environmentalist and Zinc Miner
Originally published in The Wall Street Journal, June 29, 2000.
BY MICAH MORRISON
CARTHAGE, Tenn.–On his most recent tax return, as he has the past 25 years, Vice President Al Gore lists a $20,000 mining royalty for the extraction of zinc from beneath his farm here in the bucolic hills of the Cumberland River Valley. In total, Mr. Gore has earned $500,000 from zinc royalties. His late father, the senator, introduced him not only to the double-bladed ax but also to Armand Hammer, chairman of Occidental Petroleum Corp., which sold the zinc-rich land to the Gore family in 1973.

Al Gore: The Other Oil Candidate
by Bill Mesler, Special to CorpWatch
August 29th, 2000
A Family Affair
Gore senior first met long-time Occidental CEO Armand Hammer at a cattle auction in the 1940s. When zinc ore was discovered on some of Gore’s land, Hammer and Oxy bought it for twice the amount of the only other bid. Hammer then sold the land back to Gore while retaining the mineral rights. The elder Gore then sold the land to his son, Al Jr., who has received $20,000 yearly in mineral royalties from Occidental ever since. Two years after Gore Sr. was defeated in a bid for re-election to the Senate, he joined Occidental as a member of its board of directors and was rewarded with a $500,000 a year job working for an Oxy subsidiary.
Throughout his political life, Al Gore Jr. has received the favor the patronage of Occidental and Hammer’s successor, CEO Ray Irani.

Gore’s Oil
Occidental Petroleum was founded in 1920 in California. Its early years as an oil-finding entity were largely undistinguished, with the company almost bankrupt by the mid-1950s. It was Occidental Petroleum’s early difficulties, however, that laid the groundwork for its later success. In 1956 Occidental Petroleum came to the attention of Armand Hammer, a millionaire well-known for his savvy and success in business dealings with the Soviet Union in the 1920s. In 1921 Hammer had met Vladimir Lenin, the leader of the Russian Revolution, and had become the first U.S. businessman to establish ties with the Soviet Union. Among other enterprises, Hammer had operated an asbestos mine, imported grain, and manufactured pencils. While in Moscow, he had purchased Russian art treasures at bargain prices, later reselling many art objects in the United States at considerable profit. (Later it was revealed that many of Hammer’s treasures were fakes, and he was well aware of it.)
In 1956 Hammer and his wife Frances each invested $50,000 in two oil wells that Occidental planned to drill in California. When both wells struck oil, Hammer, nearly 60, took an active interest in further Occidental oil exploration.
At Hammer’s first association with Occidental, the company was run by Dave Harris, Roy Roberts, and John Sullivan. Hammer’s increased involvement, his strong personality, and his ability to raise money for oil drilling propelled him more and more into the limelight. By July 1957 Hammer had become company president.
…
In 1966 Oxy’s potential skyrocketed, with a billion-barrel oilfield find in Libya. The find was vintage Hammer, as he wined and dined important Libyan officials and then took a risk on land previously drilled by others. The Libyan oil finds established Oxy as one of the largest petroleum companies in the world. From early 1967 until November of that same year, Oxy’s stock doubled in value to more than $100 a share.
…
In the early 1970s, Hammer caused a sensation with a $20 billion long-term deal with the Soviets that featured a barter agreement by which Oxy would supply phosphate fertilizer to the U.S.S.R. in exchange for Soviet ammonia and urea.
…
When Armand Hammer died at the age of 92 on December 10, 1990, the changeover in command at the top was expected: Ray Irani, president and chief executive officer under Hammer for six years, took over as chairman of the board. Irani worked quickly to get Oxy out from under Hammer’s slew of pet projects, many of which had no place in an oil company’s portfolio
…
In 1998, the US government sold the Elk Hills naval petroleum reserve to Occidental for $3.65 billion. According to the government, the reserve was no longer strategically necessary, and the reserve was sold to reduce the national debt and the size of the government. Critics cited the « no-bid » nature of the sale, together with Vice President Al Gore’s involvement with the company as evidence of graft.[12]

How Mr Clean got his hands dirty, By NEIL LYNDON

White House refuses to talk about Al Gore’s plan to Wiretap every electronic device in the world, 20th January 2006

U.S. Vice President Al Gore speaks at the opening of the General Assembly of the United Jewish Communities (UJC).

“Chabad has been blessed to find many good friends in the Senate since the Rebbe sent us to launch our high-profile political and legal efforts to regain the Collection,” said Rabbi Chaim Cunin, who joined Rabbi Yosef Cunin in representing their father at the event. “Over time, leaders from both parties on Capitol Hill have emerged as supporters of this important cause — from Bob Dole, to Al Gore, to Joe Lieberman, to Claiborne Pell.”

« Jon Voight headlines the annual Chabad telethon in Los Angeles, a star-studded fundraiser that attracts a long list of glitterati, Jewish and non, from Whoopi Goldberg to Al Gore. »