With M-16s on their shoulders, soldiers mark Chanukah in Iraq

Posted on 7 décembre 2007 by pascasher.the-savoisien.com

BAGHDAD (JTA) — In some ways, this year’s Chanukah in Baghdad seemed just like Chanukah any other year.

Everyone gathered around the menorah outside. I spoke about the meaning of the holiday for us, in Baghdad today.

A few people laughed as I pointed out some of the parallels between the Maccabees of old fighting for their just cause and the work the United States is engaged in every day here in Iraq.

Just like my other Chanukahs in Iraq, I couldn’t help but notice that most of those gathered for the menorah lighting were well armed. Each was in uniform and carrying an M-16, M-4 or M-9, all with ammunition, ready for action if needed.

We said the blessings over the lights and sang together under the inky night sky.
(…)
One officer told me there was a $40,000 cash bounty on his head, as well as on those of everyone in his team. In order to keep the bounty from going higher, he tries not to advertise his Jewishness.

A young soldier told me proudly that he originally is from Israel and was only in Baghdad for a few days. Fortuitously, he had seen the Chanukah flyers we had posted all over Camp Taji.

Another soldier told me how glad his mother was that there is a rabbi in Baghdad now, even though he would be heading home in a month.
(…)
A small community of Jews has been meeting here all year long, thanks to the efforts of Capt. Stephen Schwab, who led a weekly Friday night service and organized holiday gatherings with the help of a small group of regulars.—

Counterpoint: Defeating the heathens, David Forman, Dec 8 2007
…The Maccabees are a shining example of people dedicated to fighting all who would threaten the very fabric of Jewish life. Therefore, not only must we fend off those from without who would threaten our existence as a people with a right to its own state, we must also contend with those within our family who would undermine the moral values that have guided us throughout the centuries and led to the establishment of a third Jewish commonwealth – the modern State of Israel…

Pittsburgh sponsored the public lighting of a Chanukah menorah that once prompted a landmark Supreme Court ruling.

In 1986, Chabad-Lubavitch of Pittsburgh, Penn., erected its annual menorah display in front of City Hall. The American Civil Liberties Union sued, claiming the proximity of the candles to City Hall violated the First Amendment separation of church and state.

The case went to the Supreme Court, which ruled in 1989 that the Chanukah display did not constitute government endorsement of religion. Every year since then, the Chanukah menorah has gone up in front of Pittsburgh’s City Hall, but it never has been lit.—

CALIFORNIA – VIDEO: After California’s Chabad organization succeeded in gaining the support of Hollywood big shots in its latest telethon, the group’s next production was its Hanukkah celebration: a huge bash for the festival of lights that took place in Sacramento on Thursday. The event was attended by none other than California Governor Arnold Schwarznegger himself.

The hour-long festivities were broadcast live to around 100 million people across the United States.

The man responsible for all the merrymaking was Rabbi Chaim Konin, the son of the Chabad representative for west coast of the United States. (…)
The rabbi revealed the program for the big night: « The military’s top brass and many diplomats will come to light the Hanukkah candles along with the governor, but the evening’s big surprise will be when Chabad members standing alongside US soldiers serving in Iraq and Afghanistan will light the Hanukkah candles on live television in front of the whole nation.
(…)

Actor Jon Voight (Angelina Jolie’s father), a frequent attendee of Chabad events in the area, had RSVPed and said he would be showing up.—

Lighting the Menorah at the White House

After koshering a wing of the White House kitchen with US First Lady Laura Bush, Rabbi Levi Shemtov—dubbed the « Rabbi of Capital Hill »—sets out on his Hanukkah mission. Take a look as Attorney General Michael Mukasey lights Hanukkah candles, President Bush pays his respect to Chabad representatives

WASHINGTON – The larger-than-life Hanukkiya towers over gathered onlookers on the Ellipse—a manicured field located near the White House. Crowds fill the carefully-groomed lawn bundled up with heavy jackets in an attempt to insulate themselves from the teeth-chattering cold. Rabbi Abraham Shemtov wields the microphone and, among much fanfare, calls US Attorney General Michael Mukasey to the podium. Together the pair mounts the crane located nearby and the crowd closely watches as they place a torch up against the large wick to light an oversized Hanukkah candle.(…)

As Mukasey gets off the crane, he delivers a short and concise holiday message: « It’s not easy to fight for freedom, the struggle of Hanukkah continues to this day. Today we have Iraq and Afghanistan, just like in the past (there were similar struggles for freedom). » The Attorney General, who happens to be an observant Jew, takes a moment to reflect on the origins of the perennial holiday and how the lessons from the Hanukkah story can be applied to contemporary events.

« Something very special is going on here, » an elderly Jewish man says with a twinkle in his eye. « We are lighting the Hanukkiyah, one of many Jewish symbols, in one of the most symbolic places in all of America. Is there something a Jew can take more pride in than that? » he asks.

Rabbi Abraham Simantov was sent to Washington, DC by the Chabad-Lubavitch organization in 1974. Since then, he says « we have become the Jewish address for every matter and issue. »

In the last 15 years, his family including his son Rabbi Levi Shemtov, has come to join him in Washington. The younger Shemtov, deemed the « Rabbi of Capital Hill » by the Washington Post, has managed to get a lot accomplished in the US capital. During his tenure, he has helped strengthen the Chabad organization’s ties to US policymakers. Not long ago, President Bush signed a document dedicating a day of Jewish education in United States in honor of the rabbi. Rabbi Shemtov, who regularly leads educational sessions in the capital to many members of Congress, has succeeded in gathering a robust network of Senators that work to advance Jewish causes.—

Chabad envoys party it up with Schwarzenegger

Ynet correspondent Israel Bardugo heads to California for Chabad-hosted annual Hanukkah party at Governor Schwarzenegger’s residence in Sacramento. Take a look at the festivities that millions in California and America saw broadcasted live

CALIFORNIA – After meeting with US President George W. Bush and lighting the Hanukkah candles with US Attorney General in Washington, DC, Chabad representatives were granted the opportunity to share the Hanukkah festivities with yet another influential US statesman — California « Governator » Arnold Schwarzenegger.

Rabbi Shlomo Konin, Chabad’s chief envoy to California, hosted a Hanukkah candle-lighting celebration at the governor’s residence in Sacramento in an elegant affair beamed across California and the US via the major American television networks. The Hanukkah event has turned into a ritual of sorts with all of California celebrating the holiday with Chabad setting the tone.

Despite heavy rains, this year the festivities attracted Hollywood A-listers as well as soldiers and firefighters. A particular emphasis was placed on expressing appreciation for Californian firefighters for their strenuous efforts and sacrifice to put out California wildfires that plagued southern areas of the state two months ago.

During the ceremony, Governor Schwarzenegger along with Chabad envoys, awarded outstanding firefighters with certificates of appreciation for their heroism in combating the blazes. The ceremony also featured a live broadcast of a candle-lighting ceremony by US soldiers serving overseas in Iraq and Afghanistan who lit the Hanukkiyah with the assistance of Chabad emissaries that managed to arrive to the far-flung destinations. US troops lighting the menorah in Iraq and Afghanistan (Photo: Israel Bardugo)

Accomplished actor Jon Voight spoke at the event and discussed his involvement with Chabad. He urged people watching at home to support the Chabad organization and its undertakings.

During key-note speaker Governor Schwarzenegger’s turn at the podium, he spoke about the miracles that Chabad members had done for California during the wildfires.

He also touched on Chabad’s contribution to the state as a whole and shook the hands of the envoys that he said help spread the light of Hanukkah everywhere.—

Check out the photograph here. It’s from the official website of the Chabad Lubavitchers, the Orthodox Judaism group so powerful it pulls the strings of both Dick Cheney and George W. Bush. It shows a bearded Colonel Jacob Goldstein, Chief of Chaplains for New York State’s Army National Guard, sitting on the regal solid gold throne in Iraq exactly in the spot where Saddam Hussein once sat. 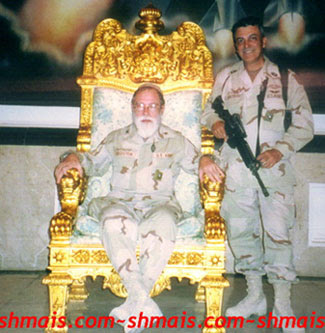 Get the symbology here? It was ancient Babylon (modern-day Iraq) that in Jeremiah’s day conquered Jerusalem and Israel and took the Jews captive. Always brimming with hate for their perceived enemies, for centuries the Jews vowed they would get their revenge.

Now, thanks to the military prowess of their proxy state, the USA, the Jewish chieftains rule over Iraq with a bloody iron hand. Their Mossad agents secretly run Abu Ghraib and other torture centers. Their well-trained men direct terrorist acts inside Iraq, blaming the bloodshed on various Islamic factions, causing chaos to run rampant.

It is, in fact, Israel’s oil engineers who are supervising Iraq’s oil pipelines, and the rich, black gold flows nonstop west across Iraq to Israeli depots. And now, their New York rabbi symbolically sits on the throne of power as the 21st Century’s King of Babylon!

Having conquered Babylon, Israel’s Zionist Masonic leadership, working hand-in-glove with Zionist neocon counterparts in the Bush Administration, have their sights set on Iran and Syria, to be quickly followed by the oil-rich Persian Gulf sheikdoms. Greater Israel is the immediate goal. Global Domination through control of the oil spigot to the West is the ultimate objective.

Someday, the rabbis are convinced, a kabbalist Jewish Messiah will sit on the throne of world power.

« And the king shall do according to his will; and he shall exalt himself and magnify himself… and shall speak marvelous things against the God of gods…
Thus shall he do in the most strong holds with a strange god, whom he shall acknowledge and increase with glory: and he shall cause them to rule over many, and shall divide the land for gain… » (Daniel 11:36-39)—

Dov Zakheim : Ordained rabbi, American-Israeli « Dual citizen », Deputy Comptroller of the Pentagon, who worked on the governments remote controlled flight program prior to his tenure at the Pentagon. Under Mr. Zakheim, the Pentagon was found to be missing $2.3 trillion as was announced by Rummy the day before 9-11. Founding member of PNAC (neocon blueprint for world domination)—

The Power of the Chabad Lubavitch over Western Politics