Posted on 29 mai 2008 by pascasher.the-savoisien.com

United States Senator Joseph Lieberman has called for banning « terrorist videos » from YouTube but Mr. Lieberman has failed to recognize that he has closely associated and allied himself with a group that has repeatedly and very publicly incited acts, against Israel, which the state of Israel considers acts of terrorism posing a security threat of the highest magnitude. Yesterday Journalist Max Blumenthal, on the Huffington post, elaborated on Lieberman’s continuing association with a US organization inciting terrorist acts against Israel. (ALSO SEE: Christian Zionism in 60 Seconds)

But on July 18, 2007, at the nonprofit 501(c)(3) group’s « A Night To Honor Israel » capstone event of it’s three-day conference, CUFI Regional Director Billye Brim suggested that « God has a plan » for the Dome of The Rock, Islam’s 3rd holiest site on Earth and the spot from which Muslims believe Moses ascended into Heaven. In the eschatolgical, or « End-Time » belief system held by most Christians United For Israel members, The Dome Of The Rock must be removed or destroyed to make way for the construction of a 3rd Jewish temple.

« Upon that hill, there is a rock, » Brim told the audience in attendance at the July 18 « Night To Honor Israel » event, which was attended by former speaker of the House Newt Gingrich, former Speaker of The House Tom Delay, other prominent US politicians and both current and former Israeli military and political leaders. « Upon that rock there is a dome, » continued Billye Brim–as she addressed, in a stern and portentous tone, the attending crowd of up to 5,000 Christians United For Israel, while journalist Max Blumenthal and videographer Thomas Shoemaker, along with DayStar TV, filmed the event and while I watched and took notes. « God has a plan for that hill, » declared Brim, to the cheers of the crowd.

Billye Brim did not directly call, on July 18th that night, for the destruction of The Dome of The Rock, but the message was clear–the Dome had to go–and in an undated audio recording I have discovered, from Billye Brim addressing a moderate sized and nearly orgiastic religious gathering, Brim makes the point more directly, stating that while she was with a group of evangelical Christians who were covertly praying around and on Jerusalem’s Temple Mount Brim received a message directly from God which told her « that dome’s coming down » and Billye Brim suggested that she knew the very date on which The Dome Of The Rock would be destroyed. « That dome’s coming down, » exulted Brim to her audience, and then she emitted what could be called nothing other than a triumphant ululation of victory.

Israel’s Shin Bet security service is charged with protecting The Dome of the Rock and the nearby Al Akhsa mosque, from attempts by Jewish, American and Islamic extremist groups to damage or destroy the Islamic holy sites, and the State of Israel considers such attempts to pose a top-level security threat to Isrsel, because it is widely assumed that the destruction would touch off a regional, or even a world, war.

In his 2000 book The End of Days: Fundamentalism and The Struggle For The Temple Mount, Israeli journalist Gershom Gorenberg described the apocalyptic aspirations of the many fringe religious groups aspiring to bring on the Apocalypse and the « end of days » through attacks on the Dome of The Rock and the Al Akhsa mosque. The danger of such attacks is not hypothetical: the last several decades have seen both individual and organized group efforts to attack the Islamic religious sites on and around the Temple Mount, from both Christian and Jewish fundamentalist groups.

But Christians United For Israel, as an organization, is itself implicated in inciting attacks upon the Temple Mount holy sites. In early 2007, a year after the launch of the Christians United For Israel organization, which Pastor John Hagee has claimed can project it’s purportedly « pro-Israel » message to millions of American voters via the email lists of numerous prominent evangelists, I publicized the fact that the Christians United For Israel organizational logo, distributed on all CUFI literature and paraphenelia, which also headed all web pages on CUFI’s official organizational website, featured a photographic image of Jerusalem’s Temple Mount from which the Dome of The Rock had been, literally, as was done by Stalin’s agents to official Kremlin photographs of Politburo members who had been assassinated, airbrushed out of the image.

When the story that the Jerusalem Temple Mount image on CUFI’s organizational logo had been altered, the Dome of The Rock airbrushed out, an Alexandria, broke nationally via the New York-based Jewish Telegraphic News Service, I wrote about it and was subsequently contacted by an Alexandria, Virginia public relations official representing CUFI who assured me that the image had not been altered in any way and that the absence of the Dome of The Rock was simply due to the perspective from which the original photograph had been taken.

When I demonstrated, via a perspective analysis published on the Talk To Action website, that such a claim was impossible, the same public relations official stated that the CUFI logo image had in fact been airbrushed, with the Dome of The Rock removed, but not by CUFI : the airbrushing had been done by an Israeli photographer. But prior to the JTA news service broadcast of the « CUFI Dome-Wiping » story I searched for the origin of the CUFI Logo airbrushed image, via a Google Image web search. In a seach of up to five hundred images of the Temple Mount and the Dome of The Rock, I was unable to find a single image that had been altered in such a way, so that the Dome of The Rock had been artificially removed.

After I registered for the July 2007 « Christians United For Israel » conference last year, I received CUFI conference materials and brochures in the mail; they still featured the original airbrushed, « wiped » CUFI logo.

YouTube responds to Lieberman’s calls for censorship: Thanks, but no thanks

The War On Terror Is A Jewish Hoax

A Jewish Police State Is Coming 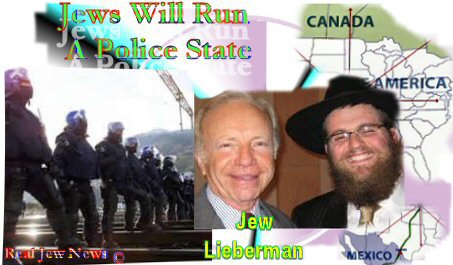