Posted on 18 novembre 2008 by pascasher.the-savoisien.com

This article appeared in monday’s National Post. I copied 2 paragraphs but you have the link to the article itself. The second paragraph refers to the King David Hotel bombing. I also included a video where, at the 6 minute mark, one of the conspirators states that they were dressed up as Arabs, just like Arafat. 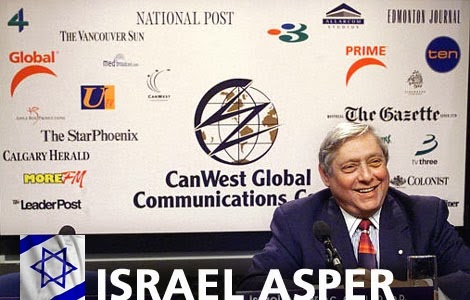 Peter C. Newman, National Post
Published: Monday, November 17, 2008
Izzy’s profound empathy for Israel was forged when he and Babs first visited the country not long after the end of the Six Day War, in 1967. “Our first trip was very moving,” remembered Babs. “I don’t think either of us realized how deeply we actually cared. Izzy was fascinated by the battle stories, and the small size of the territories involved.” They ventured north into the Golan Heights, the area that the Israeli army had months earlier taken from the Syrians. One day, Asper picked up a shell casing. “I think it was still live,” Babs recalled, “but Izzy always did stuff like that.”
….
“The true story of Zionism hasn’t been told,” Asper maintained, “because the Labour Zionists got control of the educational institutions, and of the government. I utterly supported Begin from the time I was 12 or 13. Without him and his guerrilla revolt against the British, there would be no Israel.” Begin spoke often to Asper about the tortured journey he had taken from Warsaw, where he grew up, to the day he became Israel’s prime minister in 1977. The lesson Izzy drew from Begin’s life and career was that defiance was often the only response to an intolerable wrong. His idol’s most audacious act was the July 22, 1946, bombing of the King David Hotel in Jerusalem, in which 91 people died, though civilians had been warned to stay away. In one surreal moment, years later, Asper sat with Begin at the coffee shop in the King David. “I said to Menachem — we were colleagues by then — how can you sit in this bloody coffee shop 150 feet from where you blew this place up? And his response was, ‘If I hadn’t blown up this hotel, you and I wouldn’t be sitting here having coffee.’ And of course I agreed with him.”
http://www.nationalpost.com/story.html?id=965936