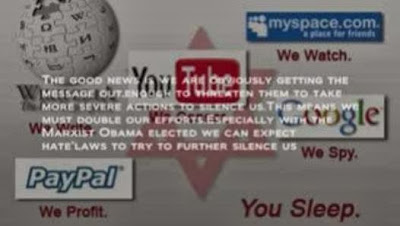 It seems that the days of using YouTube as #1 media to distribute documentaries, videos and presentations about the truth of Israel and Zionist and their horrific war-crimes history and terrorism profile, has come to an END.
Yesterday, it was announced that YouTube officially connected to the infamous ADL as partner to « Fight Against Hate. »

NEW YORK, Dec. 11 /PRNewswire-USNewswire/ — YouTube has reached out to the Anti-Defamation League (ADL) for its expertise in dealing with hate on the Internet. In one outgrowth of that partnership, the League is now a contributor to YouTube’s newly launched Abuse & Safety Center, where users are empowered to identify and confront hate, and to report abuses.
The YouTube Abuse & Safety Center features information and links to resources developed by ADL to help Internet users respond to and report offensive material and extremist content that violates YouTube’s Community Guidelines on hate speech. …
The YouTube Abuse & Safety Center was unveiled on December 11 at the annual conference of the Family Online Safety Institute in Washington D.C. and can be found at http://help.youtube.com/support/youtube/bin/request.py?contact_type=abuse.

I know it sounds too weird to believe, but that’s the news. YouTube now has on-board one of the US’s domestic branches of Israel’s intelligence service, the Mossad. The ADL, the Mossad’s most « professional » organization whose « speciality is spreading hate », are recruited as a professionals in the just struggle of « fighting against hate »?!
This partnership has many dimensions and should not be taken lightly.
1. As YouTube is one of the most viewed websites worldwide, controlling it means controlling the minds of hundreds of millions of its viewers. This is significant if we look at last year’s YouTube report in which Harris Interactive said,

It is also significant if we know that about 700,000 people do watch the YouTube concert at its peak. Imagine you are in control and show one pro-Zionist and anti-Arab/anti-Islam ad during the show.
A couple of days ago, in continuing its dominance of online video, Comscore announced these astonishing figures:

YouTube reached a record 99.5 million visitors in October, according to comScore. How dominant is that? The report indicates that, in total, 147 million people watched video online in the US during the month, meaning better than 2 in 3 watched it using a Google property. Overall, growth in online video remains robust, increasing 45 percent from last year to 13.5 billion total monthly views.

Knowing all the above facts and knowing what ADL stands for makes one ‘feel sick to one’s stomach’. It means that hundreds of millions of Americans and others around the world are now going to be officially brainwashed by the Mossad and under censorship for everything they say, upload, document and view on YouTube.
2. From now on, you should expect that no more videos that are anti-Zionist, anti-Israel, anti-war and anti-war crimes to be shown for more than the few hours (if lucky enough) after you upload your video. Sooner or later – and the period depends how critical the video is – all will be tagged with the infamous « anti-Semitism » tag and will be removed, ultimately the user will be blocked and banned. In no time, YouTube will become the official oasis for Mossad, therefore, only the Zionist version of the story will be found and endorsed by the media that follows blindly. I regret to break this news to you, but from now on Israel controls the most influential and powerful alternative media. No more « Israel crimes » to be seen or found and only pro-Zionist, pro-Israel users will continue to control the media, not only conventional, but online.
3. No more 9-11 facts, especially these connected to Israel, and they are countless. These videos and documentaries were and still are, some of the most powerful eye openers for millions who would like and need to know the hidden facts behind 9-11. The same facts which the US puppet government tried to hide from its citizens and the world. Searching YouTube (at least now, before the ADL manages to remove them all) for Israel connection to 9-11 will reveal hundreds of hours of documentaries that no one should miss if s/he really cares to know the truth behind 9-11. « What are you doing putting this stuff out there? You’re killing us! » These were the words of Abraham H. Foxman, Executive National Director of the infamous Anti-Defamation League. Foxman shouted this during a sit-down he demanded to have with an unnamed Fox News executive shortly after Sept. 11.
4. The « New Era » will flourish the anti-Arab, anti-Islam, anti-Christ, pro-Neocon and pro-Nazi videos. ADL is widely known for all the above and are specialized in it. Their history is full of cases that flip facts and spread hate. Who can forget that after Islam, Arab and anyone who criticizes the Zionist, it was the turn of Christ and Christians. Abraham H. Foxman (ADL National Director) once told Christians that they should deny part of the historical facts and rip out some parts of the Bible. In other words, change Christian faith so they are not labelled anti-Semitic! Another example of Foxman was slamming only Muslim Congressman.
Actions:
1. If you are a power user of YouTube and have the resources to do some technical stuff, download as much as you can of the videos you watched or bookmarked and upload somewhere else. I don’t have any preferences, but BlipTV and DailyMotion looks good (I won’t be surprised if these have links to Zionists too). Better is using and promoting some of the European or Arab video services.
2. Boycott YouTube! Yes, I don’t see why we need YouTube. Hundreds of similar services are available and some actually offer more than what YouTube offers.
3. Promote other video websites. Regardless which one, any other service will be better and safer than putting your neck under Zionist knife.
Censorship all over the place
Needless to remind the reader that YouTube is a monster owned by the previously known-to-be-controlled-by-zionists, Google.
It was disturbing when we heard that Uruknet was removed from Google’s news search index, but now Palestine Think Tank (PTT) has its own experience with Google censorship.
Like many other online news resources, PTT went through all the steps required by Google and applied to be indexed as one of the news resources covering Palestine. Unsurprisingly, our application was rejected for no reason. Following was the application conditions and Google news reply:

Thank you for your interest in Google News. Please read this message thoroughly for important instructions on how to finalize your request to be included in Google News. In order to help us deal with the large number of requests for inclusion, we ask that you review our guidelines below and reply to this email if your site meets our qualifications.
We typically include sites in Google News that:
– have news content that is original to the site

Yes, two thirds of our content is written expressly for our site and has its first publication on the site itself.

– don’t solely promote their own activities

It is non-commercial in nature and it is connected to many NGOs and activist and solidarity collectives as well as to news agencies.

– are written and maintained by a clear organization, one that has multiple writers and editors

There are three content editors and 25 stable contributors, listed down the right hand sidebar. We also accept content for publication by writers who are not directly connected to the site.

Please let us know if your site fits these guidelines. If it does, you may want to review our technical requirements as well found at
http://www.google.com/support/news_pub/bin/topic.py?topic=11665. After we hear from you, we’ll be happy to review your site for inclusion in Google News.
While we strive to include as many sources as possible, please be aware that we can’t guarantee the inclusion of your articles in Google News. We appreciate your support as we work to improve Google News.
Regards,
The Google Team

Hi Mary,
Thank you for your note. We reviewed your site and are unable to include it in Google News at this time. We currently only include articles from sources that could be considered organizations, generally characterized by multiple writers and editors, availability of organizational information,
and accessible contact information. When we reviewed your site we weren’t able to find this evidence of an organization.
We appreciate your willingness to provide your articles to us, and we’ll log your site for future consideration. Thank you for your interest in Google News.
Regards,
The Google Team

PTT reply to the above was:

To:
Subject: Re: inclusion in news
You are indeed mistaken:
We are a group of three content editors, who are clearly listed on the left bar. The side bar on the right clearly indicates regular contributors to the site, most of which contribute exclusively or in a first run basis to this site. There is contact information on the top bar of the menu, with four different contacts to select from. I urge you to look again, as the criteria for being a news site are all fulfilled.
mary
It’s pretty evident, it’s not the format that matters to them, it is the content, and the content has to be Google-friendly (Zionist-and now ADL-Friendly) to score with them. Even harder times for getting news and information out are up ahead. You have been warned. Now it’s up to you to fight back.
Israel recruits ‘army of bloggers’ to combat anti-Zionist Web sites