Posted on 27 décembre 2008 by pascasher.the-savoisien.com

“The amount of death and destruction is inconceivable”

It was just before noon when I heard the first explosion. I rushed to my window and barely did I get there and look out when I was pushed back by the force and air pressure of another explosion. For a few moments I didn’t understand but then I realized that Israeli promises of a wide-scale offensive against the Gaza Strip had materialized. Israeli Foreign Minister Tzpi Livni’s statements following a meeting with Egyptian President Hosni Mubarak the day before yesterday had not been empty threats after all.

What followed seems pretty much surreal at this point. Never had we imagined anything like this. It all happened so fast but the amount of death and destruction is inconceivable, even to me and I’m in the middle of it and only a few hours have passed already.

Six locations were hit during the air raid on Gaza City. The images are probably not broadcasted on US news channels. There were piles and piles of bodies in the locations that were hit. As you looked at them you could see that a few of the young men were still alive, someone lifts a hand, and another raises his head. They probably died within moments because their bodies were burned, most had lost limbs, some of their guts were hanging out and they were all lying in pools of blood. Outside my home which is close to the two largest universities in Gaza, a missile fell on a large group of young men, university students. They’d been warned not to stand in groups as it makes them an easy target, but they were waiting for buses to take them home. Seven were killed, four students and three of our neighbors’ kids, young men who were from the Rayes family and were best friends. As I’m writing this I can hear a funeral procession go by outside; I looked out the window a moment ago and it was the three Rayes boys. They spent all their time together when they were alive, they died together and now they are sharing the same funeral together. Nothing could stop my 14-year-old brother from rushing out to see the bodies of his friends laying in the street after they were killed. He hasn’t spoken a word since. END_OF_DOCUMENT_TOKEN_TO_BE_REPLACED

International Witnesses Speak Out from Gaza

The Hanukah Massacre on Gaza – Judaism in its Finest Hour

Gaza: the logic of colonial power

Nir Rosen:
Once again, the Israelis bomb the starving and imprisoned population of Gaza. The world watches the plight of 1.5 million Gazans live on TV and online; the western media largely justify the Israeli action…

No medicine for the wounded, no food, an entire family killed, five mosques bombed
Eyewitness audio: « Every moment you are expecting another bomb »

« …they (Israelis) have got to pretend to be the victims. All they have to assist them in this task is a few measly rockets being lobbed into southern Israel to little effect….the argument will be heard that no nation can tolerate missile attacks being launched against its civilians…The racist logic of this argument is obvious enough: it will never occur to these people to ask why Palestinians should tolerate being occupied and confined, subject to regular killings and a military blockade…Israel’s intransigence, brutality, recklessness, refusal to work with anyone or negotiate in any meaningful way, will continue to be projected onto its opponents for as long as Israel has the superior propaganda resources , and for as long as the colonial trope of ‘native fanaticism’ governs discursive responses to occupation and resistance. » Richard Seymour

« Since the Second Intifada broke out in 2000, Israelis have killed nearly 5000 Palestinians, nearly a thousand of them minors. Since fall of 2007, Israel has kept the 1.5 million Gazans under a blockade, interdicting food, fuel and medical supplies to one degree or another. Wreaking collective punishment on civilian populations such as hospital patients denied needed electricity is a crime of war. » Prof. Juan Cole

This bloodbath in Gaza is financed by American tax dollars. Are you still « Proud to be an American »?
The accomplice to crime is your own indifference

A « Hamas terrorist » in an orange sweater, wounded by an Israeli bomb in Gaza

« Could it be that America’s ‘Christian civilization’ is actually a euphemism for a Zionist-masonic empire that mouths rhetoric about the Bible form time to time, but is otherwise the clandestine military and economic arm of the petrified Phariseeism that seeks to rebuild the Temple of Solomon in Jerusalem? »
– Michael Hoffman, Judaism Discovered, p. 669

Hey, they’re only Palestinians
« Deir al Balah resident Hakeem abu Mansi, a 31-year-old farmer, and his 6-year-old son, Uday, were riding on a donkey cart carrying vegetables to the market when an Israeli missile struck nearby and killed them. Abu Mansi’s cousin Nael described his relative as an illiterate and apolitical farmer. « He didn’t know anything in life but his donkey and the vegetables he grew in a rented lot, » Nael said. Los Angeles Times,Dec. 29, 2008

« The death toll on the Palestinian side is at least 310. On the Israeli side two people have been killed by Palestinian rockets…Several young people were killed in Gaza City on Saturday in a busy street by an Israeli air strike. Seven of the dead were students at a UN vocational college for Palestinian refugees. Another 20 students were injured in the attack. » Rory McCarthy • The Guardian, December 29, 2008

Egypt tricked Hamas into not evacuating

Cynthia McKinney is on her way to Gaza!

On Tuesday, December 30, at 5 a.m., several Israeli gunboats intercepted the Dignity as she was heading on a mission of mercy to Gaza. One gunboat rammed into the boat on the port bow side, heavily damaging her. The reports from the passengers and journalists on board is that she is taking on water and appears to have engine problems. When attacked, the Dignity was clearly in international waters, 90 miles off the coast of Gaza.

The gunboats also fired their machine guns into the water in an attempt to stop the mercy ship from getting to Gaza.

Shades of the Lusitania!

Only this time, there was no ammo on board!

With a US Congresswoman aboard Dignity, it will be interesting to see how the whores in Washington (and Kailua) spin this as anything but a serious breach of international and diplomatic protocols by Israel. If the US Government fails to respond, it will signal to the world that Israel does indeed have a stranglehold on the government of the United States.

Look at it this way. If a Navy vessel belonging to an Arab nation intentionally attacked a mercy ship carrying a US Congresswoman, how would the US media and government react?

Please repost this story everywhere you can!

UPDATE: Israel’s official comment, being parroted all over the US Corporate media as I type this, is that Dignity rammed the Israeli gunboat! Of course, this lie will not survive when the photos and videos taken by the journalists on board Dignity reach shore, but that is the claim Israel is making; that tiny little Dignity chased down and rammed a warship!

UPDATE 2: Aware that video of the ramming will soon reach the internet Israel has now changed its story and is now saying that they did not know it was an aid ship when they rammed it. This is, of course, the same lame excuse Israel made following their attack on the USS Liberty

Maybe the world needs to take away Israel’s weapons until they can learn to choose their targets more carefully. 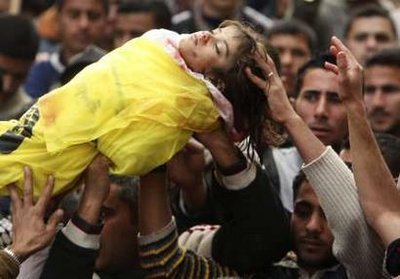 It was Israel, not Hamas, who broke the six-month peace truce

The White House’s press release is exactly the same as the Zionist Israel position, blaming the victims. It is imperative that we know why. Here is the official Israeli line, directly from Washington:

“It was “completely unacceptable” for Hamas, which controls Gaza, to launch attacks on Israel after a truce lasting several months, said Gordon Johndroe, a spokesman for the National Security Council. “These people are nothing but thugs, so Israel is going to defend its people against terrorists like Hamas that indiscriminately kill their own people.”

The reason the US Administration parrots Zionist Israel’s story is that there is a common agenda that calls for more war in the Middle East. As we have written for some years, ours is a war-based economy, and Israel plays a large part in it because the USA’s targeted enemy is Islam.

War, to those who direct our course from above and beyond presidential politics, is not about religion, but is a vehicle to force economic growth where there is now stagnation. Broader, bigger and more permanent wars is a part or the “Dilution Solution” planned to save our economy, much as World War II was thought by many to be a planned solution to the “Great Depression.”

We Hold These Truths opposes this policy, which will end only when citizens demand it.

The USA, also, uses Israel to further the war agenda. Israeli politicians willingly play their part in the US war schemes, that necessitates many secret meetings between the two. Israeli citizens will eventually be blamed for wars in the Middle East and could one day become the victims.

Zionist politicians have their own political reasons for the unreasonable brutality which has been discussed in the Arab press. Israel wants to regain political control over the Philistines, so to their way of thinking, Hamas must go. This writer uses the biblical “Philistine” in place of the popular “Palestinian” to emphasize that Arabs are the historic occupants of the land, and they presently do not even have a state. Paradoxically, they are like the unarmed David, a stateless people wondering in the land of the Philistines, but with the slingshot, versus Israel, the militarist Goliath. END_OF_DOCUMENT_TOKEN_TO_BE_REPLACED