Posted on 11 août 2009 by pascasher.the-savoisien.com 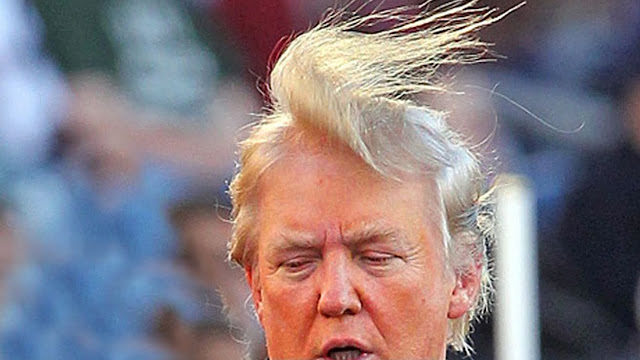 Trump Wants to Be President
But will mob ties derail
the flamboyant frontman?

Donald Trump’s rise to stardom came as a consequence of his having been a flamboyant frontman for some unsavory behind-the-scenes sponsors. Here’s the story:

In his memoir, Trump proudly described how in 1987 he bought his first casino interests when he purchased 93 percent of the voting stock in the Resorts International (RI) gambling concern.

What Trump didn’t say was that RI was controlled by a clique of sordid, international big-money elements in alliance with the Jewish crime syndicate which was, in turn, collaborating with the CIA and Israel’s Mossad in an array of inter-connected money-laundering operations. The casinos laundered money for the CIA and the Mossad. In return, these agencies used their influence to ensure the mob remained protected from interference by law enforcement.

To understand where Trump fits in, we turn to RI’s murky origins. RI evolved from a CIA front — the Mary Carter Paint Company — set up in the 1950s by then-CIA director Allen Dulles and his close associate, New York Gov. Thomas E. Dewey, a leader of the “Rockefeller wing” of the GOP. While the company did in fact operate a national paint store chain, its real purpose was to function as a covert CIA money-laundering operation.

In 1958 and 1959 Dewey and several associates used CIA funds to buy a controlling interest in the Crosby-Miller Corporation (headed by Dewey friend James Crosby), which was then merged with Mary Carter.

The new concern laundered CIA money for the arming of the anti-Castro Cuban exiles and also launched lucrative gambling enterprises in the Caribbean where the CIA was active, having engaged the Meyer Lansky crime syndicate in plots to topple Fidel Castro.

How many law-abiding Americans who bought Mary Carter’s paint would have thought they were funding a joint CIA-mob operation posing behind the smiling face of a “typical American housewife,” the fictional “Mary Carter” whose visage adorned its products?

In 1963 the company spun off its paint division and began focusing on its casino operations, particularly in the Bahamas. In 1967 and 1968 Mary Carter changed its name to Resorts International and expanded. Several principal investors provided the assets:

• Meyer Lansky, the “chairman of the board” of the Jewish crime syndicate;

• David Rockefeller, who provided his family’s clout with the CIA and in global banking to assist;

• The Investors Overseas Service, then the world’s largest “flight-capital” conglomerate, headed by notorious Bernard Cornfeld who was no more than a frontman for two behind-the-scenes principals:

• Baron Edmond de Rothschild of the infamous banking family and a personal business partner of Rosenbaum in many Mossad-related ventures; and

• William Mellon Hitchcock, an heir to the Mellon dynasty — one of America’s largest family fortunes which has collaborated closely with the CIA for years.

In 1970 the mob moved to expand legalized gambling on U.S. soil. Mob chief Lansky called a high-level syndicate conference where the fading resort of Atlantic City was pinpointed as their new target. Prior to this, Lansky-controlled Nevada was the only outpost of legal gambling in the United States. RI’s resources were used to finance the lobbying campaign that brought legalized gambling to Atlantic City and RI quickly moved in.

Trump shed his RI investments in his much-publicized “bankruptcy” but he remains a major player in the gambling industry — and now he may be running for president of the United States.

CHAPTER 7 from: The New Jerusalem

…And now, before we proceed into an in-depth examination of very specific facts and figures about the vast wealth and power of the Zionist elite, let us take one more brief digression and examine a particularly well-known American entrepreneur who—while not Jewish (so far as is known)—does, in fact, owe his rise to fame and wealth due to his behind-the-scenes support from some of the most powerful Zionist families in the United States today. We refer to the one and only Donald Trump.

WHO TOWERS BEHIND TRUMP?

THE STRANGE STORY OF

No, Donald Trump is not Jewish, but an inquiry into the background of this flamboyant American entrepreneur provides some surprising insights into Trump’s path to power and influence, for the fact is that Trump’s rise to stardom came as a direct consequence of his having functioned as hardly more than a colorful front man for some very wealthy behind the scenes sponsors. The story of the colorful businessman (and now television star) called “The Donald” is one that demonstrates how non-Jewish individuals and financial interests can rise to great heights through the sponsorship of Jewish interests.

Everyone knows, of course, about Trump’s gambling operations and of the wide-ranging links of the gambling industry to organized crime. But the story is much bigger than that. In his own memoir, The Art of the Deal, Trump proudly described how in 1987 he bought his first casino interests when he purchased 93 percent of the voting stock in the Resorts International gambling concern.

What Trump doesn’t tell his readers is what the late Andrew St. George reported in The Spotlight on Oct. 30, 1978 (and in the previous Sept. 25, 1978 issue): that Resorts International was established and controlled by front men for the Rockefeller and Rothschild families and their “enforcers” in the CIA and its allied intelligence agency, Israel’s Mossad.

The Spotlight’s report focused on the activities of Resorts International and provided readers with an extensive overview of the “fixed” gambling rackets conducted by underworld gambling elements.

What made the report so explosive was that this newspaper pointed out that the illegally rigged casinos were being operated with the collusion of “respectable” politicians, law enforcement officials, Wall Street financiers who floated loans to finance the gambling resorts, and the high-profile gambling resort operators themselves.

In addition, as St. George pointed out, many of these casino resorts run by the mob through a variety of front men have actually been engaged in a de facto partnership with behind-the-scenes mobsters who have assisted the CIA and the Mossad in massive laundering of drug and gambling profits that have been channeled into covert operations of the two allied intelligence agencies. In return, the CIA and the Mossad, using their own influence, have provided “protection” for the illegally fixed gambling operations, preventing law enforcement authorities from cracking down on this corruption.

Where does would-be president Donald Trump fit into the picture? To find the answer, one must turn to the murky origins of Resorts International.

In fact, Resorts evolved from a CIA front company set up in the early 1950s by then-CIA director Allen Dulles and his close associate, three-term New York Governor Thomas E. Dewey, political functionary in the so-called “Rockefeller Republican” wing of the GOP.

The front company in question was the innocuously named Mary Carter Paint Company which did, in fact, operate a national chain of paint stores but which was set up to function as a covert CIA money laundering operation.

In 1958-59 Dewey and a number of associates used a reported $2 million in CIA funds to buy a controlling interest in the Crosby-Miller Corporation (headed by Dewey friend James Crosby) which was then merged with Mary Carter.

Among other things, the new corporation laundered CIA money for arming the anti-Castro Cuban exiles.

The company also launched into lucrative casino gambling enterprises in the Caribbean where the CIA was quite active during that period, having engaged the Lansky crime syndicate in now-thoroughly documented and widely known plots to topple Fidel Castro who had enraged the mob by closing down its Cuban gambling enterprises.

Thus it should be no surprise that in 1963, Alvin Malnik, a top henchman of crime syndicate boss Meyer Lansky, was found to be closely connected to the operations of Mary Carter Paint.

Imagine how many law-abiding Americans who bought Mary Carter’s paint products would have been surprised to learn that they were helping fund a joint operation of the CIA and the mob which posed behind the smiling face of a “typical American housewife”, the fictional “Mary Carter” whose visage adorned its products.

In 1963 Mary Carter Paint spun off its paint division and during the next several years began developing its casino operations, particularly in the Bahamas.

In 1967-68 Mary Carter Paint officially changed its name to Resorts International and began massive expansion internationally. The Spotlight determined that several principal investors provided the funds and assets for the venture:

• Meyer Lansky, the acknowledged “chairman of the board” and chief financier of the underworld gambling syndicate, who maintained his own longstanding ties to not only Israel and the Mossad, but also the CIA and the American intelligence community;

• David Rockefeller, head of the Rockefeller financial empire, who provided his family’s clout and CIA and global banking connections to assist in the operation;

• The Investors Overseas Service (IOS), then the world’s largest flight-capital conglomerate, controlling assets worth $2.5 billion. The nominal chief of IOS was colorful Bernard Cornfeld. However, Cornfeld himself was no more than the front man for two behind-the-scenes principals:

1) Tibor Rosenbaum, who was not only the Mossad’s Swiss-based chief financier behind covert arms deals, but also the head of the Banque De Credit Internationale of Geneva, the Lansky syndicate’s chief European money laundry; and

Another investor was William Mellon Hitchcock, one of the heirs to the Mellon family fortune (one of America’s largest private family fortunes which, for many years, has also maintained close ties with the CIA).

This was the group that capitalized Resorts International, which, through a wide-ranging public relations program, aided and abetted by the American media, promoted the myth that the “new” company was “cleaning up” gambling. To promote the fable, the new venture hired on (at inflated salaries) a raft of former FBI and CIA operatives and Justice Department lawyers who assured the world that the gambling ventures run by Resorts International were “syndicate free” and “family friendly”, the facts notwithstanding.

Resorts International expanded by leaps and bounds and soon became one of the most profitable of all the gambling enterprises, and by 1970 the underworld figures who were running the casinos (in league with their behind-the-scenes partners) began moving to expand casino gambling in the United States.

Mob chief Meyer Lansky called a high-level meeting of gambling syndicate figures in Acapulco, New Mexico and there the assembled mobsters pinpointed the fading resort of Atlantic City as their first new target. (Prior to that time, of course, the mob had already established Nevada as the only outpost of legalized casino gambling on U.S. soil.)

In the wake of this meeting, the resources of Resorts International were used (publicly and privately) to begin the lobbying campaign that resulted in the legalizing of gambling in Atlantic City and once the New Jersey legislature opened up the Garden State, Resorts moved in.

Trump soon became a household name, with his colorful personality and his insistence upon naming a variety of luxury hotels, apartment houses and other commercial ventures after himself. But while the name “Trump” appeared in the headlines, the names of the real movers behind Resorts International remained hidden from public view. There is no doubt, considering the origins of Resorts International, that Trump could not have assumed the management in this enterprise if he had not had the covert support of those who brought it into being.

Trump himself ultimately shed his role in Resorts International during the period of his much-publicized “bankruptcy” but he remains a major player on the financial scene and in the gambling industry.

Thus, although Trump—a major character on the American scene—is evidently not of Jewish descent, he definitely owes much to the patronage of the Zionist elite. And this does say a great deal about the ways of power in America—the New Jerusalem. Let us proceed forward and examine those who definitely constitute America’s new elite…

Do Jews Dominate American Media ? And So What If We Do? by Philip Weiss