Posted on 8 février 2010 by pascasher.the-savoisien.com 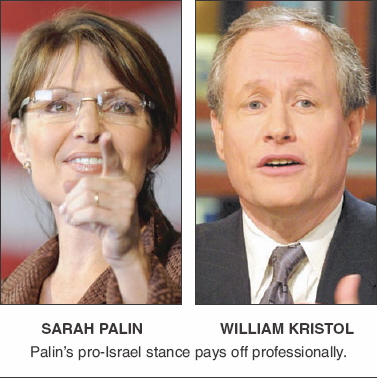 Tea Party Sarah is a Neocon

Who is pulling Sarah Palin’s puppet strings? The neocons

Judas Goats — The Enemy Within: The Shocking Story of the Infiltration and Subversion of the American Nationalist Movement (2005), Michael Collins Piper

Neoconned Sarah Palin is all for war with Iran for Israel
February 8th, 2010

Look at how that neoconned fool Sarah Palin is all for war with Iran for Israel as well in this Olbermann segment which aired on MSNBC tonight:

The Israel Lobby and Sarah Palin

Additional at the following URL:

The Israel Lobby and Sarah Palin: 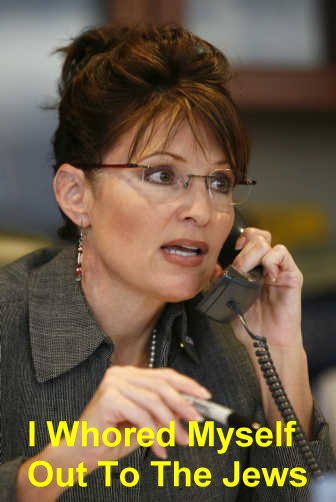 The New World Order Roots of the Council on Foreign Relations

Who’s behind the ‘New World Order’ which Pres George Bush and his Establishment allies have been promoting? First things first. Its not really a ‘new’ idea. The grand design for a new world order has been in the works for decades: It was the original premise upon which the ill fated League of Nations was conceived and, later the basis upon which the United Nations was established.

Only now, however, as a result of the crisis in the Middle East, have those who have been scheming for a new world order begun to talk publicly of their ultimate aim: one world government. This is because it has taken them until now to see their globalist dream placed within their reach.

A lot of key players in global affairs have been in the forefront of the drive for a new world order, but foremost among them are the members of the Council on Foreign Relations (CFR).

As early as 1974 the CFR launched its ‘1980’s Project’ which had as its aim ‘nothing less than the creation of a new global political and economic system to replace the existing one’. That is, a new world order. This is the assessment of Professors Laurence H Shoup and William Minter, writing in their landmark study of the CFR, « Imperial study of the CFR and United States Foreign Policy ». (Monthly Review Press, 1977).

To understand how U.S. foreign policy is conducted, you have to understand the CFR. Some go so far as to say that the CFR is « Americas secret government ». What is the CFR?

Formally headquartered in New York, the CFR’s membership constitutes a wide ranging array of powerful individuals (including members of the Rockefeller family) who operate in the Rockefeller sphere of influence. These include major figures in the media, academia and the corporate, legal and financial worlds. There is also a significant number of government officials (both elected and appointed) who serve as CFR members.

According to author Ferdinand Lundberg, writing in THE ROCKEFELLER SYNDROME (Lyle Stuart, Inc 1975) « The people associated with the CFR include just about all who have a direct ownership stake in the external economic and financial instrumentalities that service the American market. « They know long before the average citizen does when these instrumentalities are being threatened or interfered with. The maintenance of peace, of course, is important. But there are times when one may have to fight for one’s vital interests »

As shown by this quote, the CFR plays a major role in deciding whether America goes to war. Today, as the United States stands on the brink of catastrophe in the Middle East, it is members of the CFR who are deciding when and if America should go to war. A chart, not included in this report, shows that the key policy making positions in the Bush administration (particularly in the realm of foreign policy) are occupied by CFR members.

The CFR publishes the quarterly journal FOREIGN AFFAIRS, and conducts regular meetings and seminars, from its official headquarters at 58 East 68th street NYC,NY. It should be readily available in many libraries. Key meetings are confidential and strictly off the record.

Created in 1921 with Rockefeller family funding, the CFR emerged as the American branch of the British Royal Institute on International Affairs (RIIA). The RIIA was the brainchild of English financier Cecil Rhodes. It was devoted to the ultimate goal of restoring British hegemony over the United STates. It is this British link that leads so many critics to charge that the CFR, is in effect, the U.S. office of Whitehall (The British foreign ministry). As a consequence, the CFR has never failed to advance U.S. foreign policy measures that prop up Britain in one way or another: most notably engineering U.S. intervention into the European conflict that evolved into World War II.

It has been this way since the establishment of the CFR. CFR members beginning with the Republican administration of Herbert Hoover, on through the present day in administrations of both parties, have continuously been appointed to key policymaking posts, steering the course of America’s engagement in world affairs.

Leading figures from within the CFR played the primary role in creating the United Nations, the global body that — at least under the so called ‘new world order’ would serve as the ‘de facto’ « world government ». No surprise then that it was the Rockefeller family itself that donated the land upon which the United Nations headquarters building stands.

According to Shoup and Minter, « The planning of the UN can be traced to the ‘secret steering committee’ established by the late secretary of state Cordell Hull in 1943. » All of the members of this secret committee, with the exception of Hull — a Tennessee politician, were members of the CFR. « They saw Hull regularly to plan, select, and guide the labors of the State Department’s advisory committee. It was, in effect, the coordinating agency for all the State Depts postwar planning. These CFR officials « were most responsible for the final shape of the United Nations ». Today, the UN is playing a pivotal role in the design for a New World Order.

President Bush has cast his war against Iraq as a part and parcel of the plan for a new world order. Once Saddam Hussein has been vanquished, Bush promises, the New World Order can come to full flower. However, for the Establishment to successfully foist its NWO onto the American people, it will first be necessary for the powers-that-be to propagate its « party line » to the masses. The mechanism is there for the CFR to do this.

Altho the CFR is Manhatten based, its reach is coast-to-coast and beyond. The CFR has affiliate entities (dozens of them in fact) in major cities across the country: locally prominent figures in politics, society and academia are invited to « exclusive » membership in CFR affiliates. These entities bring to their forums well known global figures and conduct policy seminars which promote the NWO propaganda line of the CFR on the local level.

A major part of Establishment’s drive for NWO is shaping public opinion — this so that the voting public will accept the internationalist agenda laid forth by the planners behind the scenes. According to one leading CFR member, the planners of the NWO « seek a private consensus » on major issues. « Consensus seeking », he said « must be a central element ». The power brokers « will seek to educate attentive audiences so that public opinion will come to reflect the private consensus ».

In other words, the CFR power brokers will seek a consensus among their own particular elite regarding what approaches to take toward major international issues. And after such a « consensus » is reached, the power brokers will use their influence to « educate » local elites (such as those who make up CFR affiliates around the country) towhat is « best » for the people. As a result, these influential groups will then propagate the CFR’s NWO propaganda line in « the public interest ».

In this way, a small clique (such as those operating in the Rockefeller-CFR shpere of influence) is able to propagate its views to eager local audiences who then spread globalist, anti- national thinking in their own communities.

The Jews Behind Palin 2012 — http://jewsforsarah.com

In Defense of Sarah Palin (The Wall Street Journal)