Posted on 25 avril 2010 by pascasher.the-savoisien.com Hating Obama as a new form of religion
« There is no doubt that now the enemy of the Jewish people is Barack Hussein Obama, » said pro-Kahane activist Noam Federman, a leader of the campaign.
« Obama is the most anti-Semitic president the U.S. has ever had, » Federman told Maariv daily’s website last week. « The time has come for our blind politicians to wake up and understand that you can’t make policy according to the obsession of an Israel-hater. »

By Michael Collins Piper
Outspoken Israeli-born critic of Israel Gilad Atzmon put it bluntly in the title of his March 25 Internet essay: “Judea Declares War on Obama.” Atzmon—whose candor is unswerving—was referring to the recent avalanche of bitter commentary unleashed at Barack Obama by powerful international Jewish organizations that perceive the president’s Middle East policies to be less than supportive of the demands of Israel and the Jewish lobby in America.

While Israeli immigrant Orly Taitz—a hardline Arab- and Muslim-basher—beats the bushes in public forums all across America, questioning the legitimacy of Obama’s citizenship and thus the very constitutional legitimacy of Obama’s occupation of the White House itself, her ideological allies, at the higher levels—an amazing array of big-name Jewish leaders and organizations— have been openly damning the president in unprecedented terms.

Leading the pack, predictably, was the American Israel Public Affairs Committee (AIPAC), which conjured up a letter, signed by 76 members of the Senate and 333 members of the House, ordering the president and Secretary of State Hillary Clinton to be more accommodating to Israel.

AIPAC—like other Jewish lobby voices—believes the president and Clinton are doing damage to the so-called “special relationship” between the United States and Israel.

Among other things—and at the focus of controversy between the Obama administration and Israel—the Jewish lobby groups uniformly condemn the Obama administration’s open criticisms of Israel for working to expand the Jewish population of Jerusalem, which is a Holy City not only to Jews but to Christians and Muslims. In general, however, the Jewish lobby perceives Obama as the grand wizard behind a concerted reassessment (even redirection) of long-standing U.S. favoritism for Israel.

Not missing a beat, on April 15—the very day that American taxpayers are annually asked to “ante up” for billions of dollars in U.S. giveaways to Israel— the Anti-Defamation League (ADL) of B’nai B’rith issued a no-holds-barred broadside aimed at the president, proclaiming that “[The] Administration’s Shift in Policy Toward Israel is a Faulty Strategy.”

The ADL’s national director, Abe Foxman, charged that Obama’s policy was “dangerous thinking.” He declared that the administration has issued a “blatantly disproportionate” number of statements in which the president and his advisors have allegedly asked too much from Israel in the effort to reach a settlement of the Arab-Israeli conflict, particularly the crisis surrounding the beleaguered Palestinians in the West Bank and Gaza. Foxman asserted:

The significant shift in U.S. policy toward Israel and the peace process, which has been evident in comments from various members of the Obama administration and has now been confirmed by the president himself in his press conference at the Nuclear Security Summit, is deeply distressing. Saying that the absence of a resolution of the Israeli-Palestinian conflict undermines U.S. interests in the broader Middle East and the larger issue of resolving other conflicts is a faulty strategy. It is an incorrect approach on which to base America’s foreign policy in the Middle East and its relationship with its longtime friend and ally, Israel. ADL has long expressed its concern from the very beginning of the Obama administration about advisers to the president who see the ongoing Israeli- Palestinian conflict as a major impediment to achieving the administration’s foreign policy and military goals in the wider region.

In tandem with the ADL, Ronald Lauder, billionaire president of the World Jewish Congress, issued an open letter to the U.S. president that was published in full-page advertisements in The Washington Post and other major media outlets. Declaring that “Jews around the world are concerned” about Iran and complaining that “the Jewish state is being isolated and delegitimized,” Lauder excused the actions of what he described as “the Israeli housing bureaucracy” having made “a poorly timed announcement” (regarding the expansion of Jewish housing in Jerusalem) and expressed anger that the Obama administration had called the announcement an “insult” that reflected “the dramatic deterioration” of the relationship between the U.S. and Israel. Lauder’s open letter laid bare the concerns of the global Jewish community:

Our concern grows to alarm as we consider some disturbing questions. Why does the thrust of this administration’s Middle East rhetoric seem to blame Israel for the lack of movement on peace talks? . . . Another important question is this: What is the administration’s position on Israel’s borders in any final status agreement? Ambiguity on this matter has provoked a wave of rumors and anxiety. Can it be true that America is no longer committed to a final status agreement that provides defensible borders for Israel? Is a new course being charted that would leave Israel with the indefensible borders that invited invasion prior to 1967? . . .And what are America’s strategic ambitions in the broader Middle East? The administration’s desire to improve relations with the Muslim world is well known. But is friction with Israel part of this new strategy? Is it assumed worsening relations with Israel can improve relations with Muslims? History is clear on the matter: appeasement does not work. It can achieve the opposite of what is intended. And what about the most dangerous player in the region? Shouldn’t the United States remain focused on the single biggest threat that confronts the world today? That threat is a nuclear-armed Iran. Israel is not only America’s closest ally in the Middle East, it is the one most committed to this administration’s declared aim of ensuring Iran does not get nuclear weapons.

Lauder closed his challenge to the president by saying that “it is time to end our public feud with Israel,” but on the web site of the WJC publicly expressed opinions of the president were openly displayed with one WJC member saying that Obama “does not value the U.S. relationship with Israel and will willingly sacrifice [Israel]” in order to achieve its goals. Another Jewish leader declared that “There was ample evidence of this president’s animosity toward the Jewish people before the election. He is an anti-Jewish bigot.” And yet another charged that Obama and his administration are “friendly with Israel’s enemies.”

Holocaust industry professional Elie Wiesel took out his own full-page advertisements in The Washington Post and The Wall Street Journal to blast the administration for its concerns about Israel’s expansion of Jewish housing in Jerusalem. Referring to Wiesel’s commentary, Erick Stakelbeck who writes on “terror” for Christian Zionist fanatic Pat Robertson’s Christian Broadcasting Network, proclaimed:

“When famous Holocaust survivor, human rights activist, humanitarian and Nobel Prize winner Elie Wiesel drops the hammer on you over your Israel policy, you know you are doing something horribly wrong.”

And Jennifer Rubin of the American Jewish Committee– associated Commentary magazine chimed in, noting that while Wiesel didn’t mention Obama by name “his point could not be clearer: ‘Forget it, Mr. President’.”

Ms. Rubin concluded in threatening AJC style: It is significant that it is Wiesel—a Jewish figure without peer and the embodiment of Holocaust memory—who writes this. It is as powerful a rebuke to an American president as any he can receive. It is not simply a geopolitical critique; it is an indictment of Obama’s ignorance of and lack of sympathy with the Jewish people. It cannot be ignored. Rough times may well lie ahead for Barack Obama, who just recently was described as an “anti-Semite” by the brother-in-law of Israel’s prime minister.

As AFP readers will recall, these trends point toward what AMERICAN FREE PRESS—alone among the media—reported on Dec. 1, 2008, just a month after Obama’s election: the possibility that Obama could “pull a JFK” once in office and dare to challenge Israel.

Although many still are unable to comprehend why all of this is happening, considering the fact that two key members of his inner circle—Rahm Emanuel and David Axelrod—are Jewish (with Emanuel having held U.S.-Israeli dual citizenship and being the son of a former Jewish terrorist), even Emanuel and Axelrod have been attacked in Israel as “self-hating Jews.”

Those familiar with the JFK administration will recall that although JFK had a number of Jewish advisors he still stood up to Israel on numerous fronts including Israel’s effort to build nuclear weapons. Obama’s fate remains to be seen.

A journalist specializing in media critique, Michael Collins Piper is the author of The High Priests of War, The New Jerusalem, Dirty Secrets, The Judas Goats, The Golem, Target Traficant and My First Days in the White House All are available from AFP.
Subscribe to American Free Press. Online subscriptions: One year of weekly editions—$15 plus you get a BONUS ELECTRONIC BOOK – HIGH PRIESTS OF WAR – By Michael Piper.

Print subscriptions: 52 issues crammed into 47 weeks of the year plus six free issues of Whole Body Health: $59 Order on this website or call toll free 1-888-699-NEWS .

Sign up for our free e-newsletter here – get a free gift just for signing up! 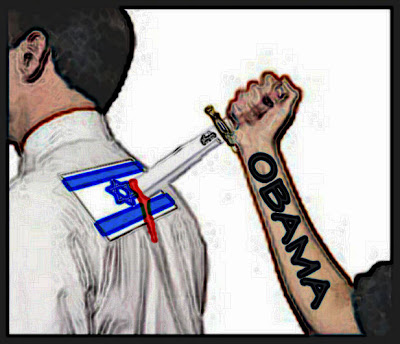 JPOST: Foxman: US shift in Israel policy « deeply distressing »
In a statement, Foxman described as “deeply distressing,” the “significant shift in US policy toward Israel and the peace process, which has been evident in comments from various members of the Obama Administration and has now been confirmed by the president himself in his press conference at the Nuclear Security Summit.”
Foxman’s statement went on to criticize the “blatantly disproportionate number and the nature of statements issued by this administration criticizing Israel as compared to what has been said about the Palestinians,” as well as what he described as “dangerous thinking” that “shifts responsibility for success of American foreign policy away from Iraq, Afghanistan, Pakistan, Saudi Arabia, and Egypt and directly onto Israel.”(…)
Foxman was far from alone in his criticism. Late last week, World Jewish Congress Chairman Ronald Lauder penned an open letter to Obama, published in a number of major newspapers including The Jerusalem Post, in which he, too, called on Obama to reassess his administration’s policy regarding Israel.
Lauder, who is known to support Prime Minister Binyamin Netanyahu and ran as a Republican candidate in a New York City mayoral race, also blasted the administration for “seeming to blame Israel for the lack of movement on peace talks,” arguing that “after all, it is the Palestinians, not Israel, who refuse to negotiate.”
Nobel Laureate Elie Wiesel also put his thoughts in print, taking out paid advertisements in The Washington Post and The Wall Street Journal entitled: “For Jerusalem.”

Clinton: The Mideast must be freed of nuclear weapons