Posted on 7 juin 2010 by pascasher.the-savoisien.com 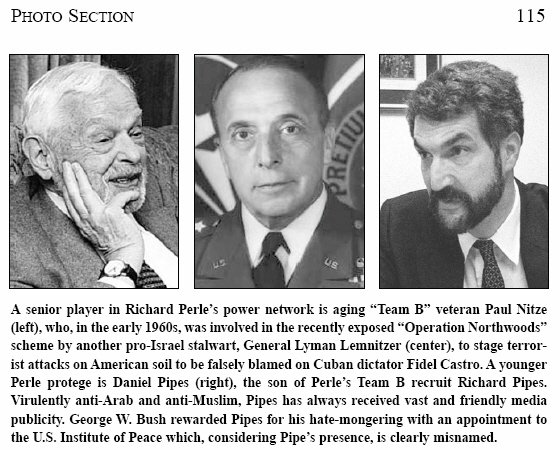 Source: The High Priests of War: The Secret History of How America’s Neo-Conservative Trotskyites Came to Power and Orchestrated the War Against Iraq as the First Step in Their Drive for Global Empire, par Michael Collins Piper

Yes, American Leaders Pondered Staging
« False Flag » Attacks on American Citizens
to be Blamed on Foreign Enemies
Foreword to Michael Collins Piper’s FALSE FLAGS: Template for Terror
In the wake of the tragic Oklahoma City bombing, media pundits raised voices of horror at the suggestion by some that U.S. govemment operatives might have played a part in orchestrating the bombing for some geopolitical purpose or other purposes unknown.
However, in 2001–six years after the Oklahoma tragedy and just six months before the 9-11 terrorist attacks–best-selling author James Bamford released his book Body of Secrets, a thoroughly-mainstream history of the National Security Agency.
A respected veteran joumalist with close ties to the American national security establishment, Bamford could not, by any stretch of the imagination, be ranked as a « conspiracy theorist, »  However, in the pages of his book, Bamford revealed that in January 1961, top U.S.policy makers were considering a horrific scheme to launch terrorist attacks on American citizens and point the finger of blame at Fidel Castro’s communist Cuba.
Here’s what Bamford wrote:

According to documents obtained for Body of Secrets, [then-Joint Chiefs of Staff Chairman, Army General Lyman] Lemnitzer and the Joint Chiefs proposed secretly to stage an attack on the American naval base at Guantanamo Bay, Cuba and then blame the violent action on Castro.
Convinced that Cuba had launched an unprovoked attack on the United States, the unwitting American public would then support the Joint Chief’s bloody Caribbean war.
After all,who would believe Castro’s denials over the word of the Pentagon’s top military commanders?
The nation’s most senior military leadership was proposed to launch a war, which would no doubt kill many American servicemen, based solely on a fabric of lies.
On January 19, just hours before [then-President Dwight] Eisenhower left office, Lemnitzer gave his approval to the proposal. As events progressed, the plan would become only the tip of a very large and secret iceberg.

Lemnitzer–a self-described « imaginative planner »–kept his initial plan in cold storage. However, after the new Kennedy administration’s Bay of Pigs fiasco, which left Fidel Castro stronger than ever before, Lemnitzer reinvigorated his scheme under the name « Operation Northwoods, »
In Body of Secrets, Bamford laid out the shocking parameters of this high-Ievel plan for false flag attacks. Bamford wrote:

The plan, which had the written approval of the chairman and every member of the Joint Chiefs of Staff, called for innocent people to be shot on American streets; for boats carrying refuge es fleeing Cuba to be sunk on the high seas; for a wave of violent terrorism to be launched in Washington, D.C., Miami and elsewhere.
People would be framed for bombings they did not commit; planes would be hijacked. Using phony evidence, aIl of it would be blamed on Castro, thus giving Lemnitzer and his cabal the excuse, as weIl as the public and international backing, they needed to launch their war.

What makes this so additionally disturbing is that this was not some wild scheme by « mad bombers » inside the military. In Bamford’s estimation, « the idea may actually have originated with President Dwight Eisenhower in the last days of his administration.’
Bamford reported that Eisenhower was determined to invade Cuba and that if Castro did not provide an excuse prior to the inauguration of newly-elected President John F. Kennedy, Eisenhower suggested that the United States « could think of manufacturing something that would be generallyacceptable.
What Eisenhower was suggesting, writes Bamford,was « a bombing, an attack, an act of sabotage carried out secretly against the United States by the United States. Its purpose would be to justify the launching of a war. It was a dangerous suggestion by a desperate president. » Lemnitzer–Eisenhower’s protege–was eager to carry out the plan. Although a direct proposal for the assassination of then-astronaut (and future U.S.Senator) John Glenn was never put in writing, Lemnitzer did propose that « if » Glenn’s historic earth-orbiting journey of 1962 should be interrupted by an explosion of his rocket, the U.S.government should:

Lemnitzer also had in mind the possibility of a dramatic scenario recalling the 1898 disaster which befell the U.S.S. Maine in Havana harbor, sparking the Spanish-American war:

We could blow up a U.S. ship in Guantanamo Bay and blame Cuba. Casualty lists in U.S. newspapers would cause a helpful wave of national indignation.

Terrorism on American soil by Americans against Americans–but blamed on Castro–was also offered up by Lemnitzer and his advisors:

We could develop a Communist Cuban terror campaign in the Miami area, in other Florida cities and even in Washington. The terror campaign could be pointed at Cuban refuge es seeking haven in the United States ….
We could sink a boatload of Cubans en route to Florida (real or simulated) …. We could foster attempts on lives of Cuban refugees in the United States even to the extent of wounding in instances to be widely publicized.

Among the extraordinary proposals cited by Bamford, quoting the original documents:

• Exploding a few plastic bombs in carefully chosen spots, the arrest of Cuban agents and the release of prepared documents substantiating Cuban involvement also would be helpful in projecting the idea of an irresponsible government .
• Hijacking attempts against civil air and surface craft could appear to continue as harassing measures condoned by the Government of Cuba.

Following in Lemnitzer’s tradition, like-minded « intellectuals » in the defense establishment continued to formulate plans passed on to the military leadership that were designed to provoke a war through a staged terrorist attack. One proposal, cited by Bamford, read:

A contrived « Cuban » attack on an OAS [Organization of American States] member could be set up and the attacked state could be urged to « take measures of self-defense and request assistance from the U.S.and OAS; the U.S.could almost certainly obtain the necessary two-third support among OAS members for collective action against Cuba. »

This same proposal made the suggestion that the United States should bribe someone in the Castro regime to launch an attack on an American military installation.This, Bamford pointed out, constituted treason.
Bamford also revealed that one of the defense department’s civilian « intellectuals, » Paul H. Nitze–then an assistant secretary of defense–came up with a plan sent to the White House in May 1963. Nitze proposed-in Nitze’s own chilling words:

A possible scenario whereby an attack on a United States reconnaissance aircraft could be exploited toward the end of effecting the removal of the Castro regime.

In the event Cuba attacked a U-2, Nitze proposed sending in additional American pilots, this time on dangerous, unnecessary low-Ievel reconnaissance missions with the expectation that they would also be shot down, thus provoking a war.
Nitze said that « [The U.S.could undertake various measures designed to stimulate the Cubans to provoke a new incident. » However, Bamford added wryly that « Nitze, however, did not volunteer to be one of the pilots. »
In later years, Nitze–along with his ally Lemnitzer–would emerge as one of the Israeli lobby’s key contacts inside the defense establishment in official Washington. Nitze and Lemnitzer–who were both hard-line Zionist Jews–worked relentlessly through a variety of venues to advance Israel’s cause, manipulating American policy to benefit their favorite foreign nation.
The obvious point thus naturally arises:
If American leaders would actually consider staging false flag attacks on their fellow countrymen, how far beyond the pale is it to consider the possibility–really, the likelihood-that a foreign nation (in this case, Israel) would stage false flag attacks onAmerican soil in order to advance its own geopolitical agenda?
That’s an uncomfortable question for many to face, particularly those people–Christians and Jews alike–who are devoted to the security of Israel and who believe it is the responsibility of the United States and all mankind to assure the survival of the nation that is the home to « God’s Chosen People:’
However, as we shaIl see in the pages that follow, there is strong evidence indded to suggest that America’s closest ally did indeed play the pivotal behind-the-scenes role in the three most infamous acts of political terrorism ever carried out on American shores.
In each case Israel did indeed utilize false flags as part of an even more fine-tuned template for terror that we find repeated again and again and again, beginning with the JFK assassination and then with the Oklahoma CIty bombing and ultimately with the 9-11 tragedy.