Posted on 18 juin 2010 by pascasher.the-savoisien.com 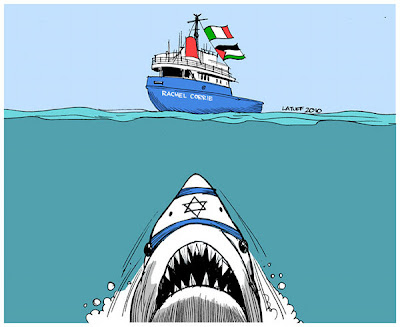 Thanks to the internet, Israel’s terrorist attack on the Free Gaza ship, Mavi Marmara, could hardly be less publicized. Yet on June 8, 1967—43 years ago—Israeli air and sea forces attacked another ship in international waters. It was the USS Liberty, conspicuously flying its American flag in clear weather; Israel used bombs, napalm and torpedoes against it. The attack on the Liberty remains the only maritime incident involving fatalities in US history which was never investigated by Congress. The attack occurred in international waters, and reports by eyewitnesses flatly contradict the Israel-excusing narrative to which the US agreed.
This article examines stunning parallels between the Liberty attack and the recent brutal takeover of the Gaza-bound flotilla. Both attacks occurred in international waters. In both, Israel heavy-handedly silenced eyewitnesses, discredited survivors, controlled a biased investigation—after having ordered the attacks to protect an even greater crime.
Joe Meadors survived both attacks. He was aboard the Liberty in 1967 and also an activist passenger on the flotilla this June. Meadors says international waters were violated both times. The Israelis, he says, “ think they can do no wrong. Every time they speak they say they don’t break any laws, they always abide by international laws. But, they break them with impunity and the US Government is not going to hold them accountable, nobody is.”
Is such pessimism warranted? It certainly is.
Forty-three years have passed since 34 servicemen were killed by Israel in international waters. The truth seems just as sinkable today.

During the flotilla attack, one journalist was able to broadcast 90 seconds of live coverage to Al Jazeera, and then communication was cut off, as the Israelis jammed the activists’ communication devices. This is exactly what happened on board the Liberty. Communication devices were jammed with what survivors described as a “buzzsaw sound.”
The brief video dispatched to Al Jazeera reports civilian activists attacked with live fire by the IDF even while waving the white flag of surrender—dozens injured and several killed in international waters, while bearing aid to try to break the Gaza blockade. A Brazilian filmmaker was also able to smuggle out 60 minutes of tape in her underwear. The rest of the physical evidence—cameras and film—were seized by Israel and have still not been returned.
As the news about the flotilla attack was first surfacing, Israel dominated the information flow; the eyewitness survivors were being “quietly herded to Ashdod without means of communication to the outside world.”
Similarly, when the wounded were finally being evacuated from the Liberty, they were commanded not to speak to the press about what had happened. Thirty-four US soldiers were dead and 174 were wounded—yet eyewitnesses were not able to tell what they had seen and heard.

After the flotilla event and continuing today, ADL/Israel has focused on discrediting the flotilla passengers by linking them to international terrorist groups. New York officials are asking the State Department to look into the visa applications of flotilla survivors who want to share their testimony in Brooklyn. Jewish Senator Chuck Schumer—who recently said Gaza should be economically strangled until it admits Israel’s right to exist—is forcefully insinuating that the flotilla activists are linked to Al Qaeda. Thus, flotilla survivors who raise their heads are threatened with personal investigations and public slander, pressuring them to keep their mouths shut.
Survivors of the Liberty who knew Israel had purposefully attacked their vessel were also silenced. Richard Larry Weaver, a seaman aboard the Liberty, says he was visited in the hospital by a three-star admiral. The admiral asked what had happened on the Liberty; and when Weaver stated his testimony, the admiral said, “ “If you tell anyone what happened you will be put in prison and we’ll lose the key.”

The investigation of the U.S.S. Liberty was conducted by the US Navy, which forbade eyewitnesses from reporting their testimony. “Within three weeks, the Navy put out a 700-page report, exonerating the Israelis, claiming the attack had been accidental and that the Israelis had pulled back as soon as they realized their mistake. Defense Secretary Robert McNamara suggested the whole affair should be forgotten. ‘These errors do occur,’ McNamara concluded.”
The attack on the Liberty remains the only maritime incident in US history, involving fatalities, which was never investigated by Congress. The Liberty Veterans Association, composed of survivors, says the inquiry didn’t even examine Israeli culpability but only focused on American miscommunications. No Israelis were questioned. All known survivors agree the attack was deliberate. But then, as today, the USA colluded with Israel to cover up the attacks and slaying of American citizens.
A Turkish-American was killed during the raid of the flotilla yet is receiving no justice from his country — just the opposite: A senator has called for the arrest and prosecution of any Americans on board the vessels! The “inquiry” into the flotilla attack will be as much a sham as the Navy’s 700-page report on the U.S.S. Liberty. The US has agreed that an independent Israeli committee should look into the attack! The Jewish Forward admits there will be no real investigation of the Israeli military’s attack on the flotilla; only policy decisions will be examined. There will be a virtual “firewall” between the inquiry and the military.
“The panel will not be able to investigate firsthand the events on the ship and will not be able to judge between the two contradicting narratives — the Israeli storyline that depicts an encounter between lightly armed commandos and bloodthirsty terrorists, and the Turkish one that talks of peace activists on their way to a humanitarian relief mission brutally attacked by the Israeli navy. Furthermore, preferring an Israeli committee to an international panel means that investigators would likely have little to no access to the activists who were on board the ships.”

Violence Protects an Even Greater Crime

It is certain that Israel attacked the Liberty to cover up even more sinister crimes. In 1995, two shallow mass graves of Egyptian soldiers were discovered outside the Sinai city of El Arish; they were prisoners of war slaughtered by the Israeli army. James Bamford, in his 2001 Body of Secrets, suggests the Liberty, an intelligence ship, may have been attacked to prevent its discovery of these slaughters, to which Israeli veterans have admitted. A retired Israeli general personally admitted to murdering 49 surrendered and unarmed Egyptian POWs with submachine gunfire during the 1967 war.
George Ball, Undersecretary of State under Johnson and Kennedy, authored a 1992 book, The Passionate Attachment: America’s Involvement with Israel, 1947 to the Present. Ball’s book presents his conviction that the Liberty was attacked to prevent it from interfering with Israel’s plan to violate any ceasefire until it had completely seized the Golan Heights.
Ball reports, “Yet the ultimate lesson of the Liberty attack had far more effect on policy in Israel than in America. Israel’s leaders concluded that nothing they might do would offend the Americans to the point of reprisal. If America’s leaders did not have the courage to punish Israel for the blatant murder of American citizens, it seemed clear that their American friends would let them get away with almost anything.”
This has certainly been proven true in 2010. While the world gasps in horror, the United States stands with Israel’s “right to self-defense,” regardless of the cost in innocent life and the violation of international law.
Just as the Liberty was attacked to protect even greater crimes, so the Gaza-bound flotillas were attacked to prevent their interference with the continued blockade of Gaza—an atrocity that keeps 1.5 million people crowded into an open air prison. An Israeli Arab MK has told the European Parliament that Israeli leaders should be tried at The Hague for their crimes; in preventing medical supplies and medicine into Gaza, Israel has caused at least 700 Palestinian deaths at its border crossings, he said.
Incredibly, pro-Israel America, particularly Christian conservatives, will not face the truth about these even darker realities.
History has shown that if we ignore dark realities in the present, darker ones are sure to come.

The Ugly Truth Podcast – June 17, 2010 Phil Tourney joins the show as we interview Ken O’Keefe, the former US Marine who was aboard the Mavi Marmara that was murderously attacked by Israel on Memorial Day. Those interested in getting hold of Phil’s new book “What I Saw That Day” can do so here
The Ugly Truth Podcast June – 8, 2010 On this 43rd anniversery of Israel’s attack on the USS LIBERTY we are joined by USS LIBERTY survivor Phil Tourney as we commemorate the 34 dead as well as our special guest Ambassador Edward Peck.

The War Party – The Zionist Influence on NeoCon Foreign Policy(BBC)

Le lobby d’Israel – The influence of AIPAC on US Foreign Policy (V.F.)

The Persecution of Revisionists: The Holocaust Unveiled

A Holocaust Inquiry, by David Duke (chapt.12 from « Jewish Supremacism »)