Posted on 22 janvier 2011 by pascasher.the-savoisien.com

VIDEO – Is Big Brother Watching You From Israel?

Is espionage against America a Jewish bad habit? Among other things in tonight’s rant, Michael Collins Piper suggests that while Rep. Peter King (R-N.Y.) is busy investigating so-called Muslim radicals in upcoming congressional hearings that King would do much more to contribute to American national security by launching a widespread inquiry to a recent and clearly-documentable political phenomenon: the repeated involvement by Jewish American supporters of Israel in all manner of espionage (including at the highest levels) that has been investigated by the FBI but which has been largely unreported (except for the Jonathan Pollard case) by the mass media in America. You are warned: As with all of Piper’s broadcasts, this is not for the feint of heart.

Wolfowitz , Perle, Ledeen, Feith – ‘ALL Under FBI Scrutiny at One Time or Another on Suspicion of Espionage on Behalf of Israel’ !

Wolfowitz `gal pal’ scandal nothing compared to charges of treason

IT MADE THE NEWS when World Bank President Paul Wolfowitz was caught arranging a sweet deal for his mistress with World Bank funds, but the fact that Wolfowitz was once investigated for spying for a foreign government has kept under wraps by the mass media in America. Those who make it their business to know about the doings of intriguers such as the big man at the World Bank recognize that Wolfowitz is a traitor who once engaged in espionage on behalf of Israel—and got away with it. However, the much bigger scandal, dating back to 1978, has never been plastered across the front pages of newspapers or slavered over by grinning media personalities.

While the employees of the World Bank are up in arms and have publicly hissed him and called for his ouster, Wolfowitz is still hanging on at the World Bank with the support of the Israel-controlled Bush administration.

That many are reveling in the scandal surrounding Wolfowitz is not surprising. Not only is Wolfowitz a “neo-con” (that is, one of the famous neo-conservatives) but he is also, as brash commentator Maureen Dowd has noted, a “con,” in the classic sense of the word: a con-man, a crook, evidenced by his influence-peddling on behalf of his mistress. However, in addition, one might suggest, Wolfowitz should also be considered a “con” in another sense of the word: short for “convict”—as in prison convict, which is where Wolfowitz might have ended up if he had been charged with spying for Israel as some federal agents believe he is guilty of having done. (….Full Article Here)

« Some people within our administration had dual interests, and they considered it proper to leak secrets if it would further their special goals. Much later, in January 2009, when Presidents Clinton, George H.W. Bush, George W. Bush, and I met with President-elect Barack Obama, we all laughingly agreed that there was no way to prevent any secrets being shared with Israel if they were known by more than two people in the White House, State or Defense Departments. » (Jimmy Carter, White House Diary)

If Rep. Peter King (R-N.Y.) is interested in fighting terrorism and treason, he should not only look at the first source of terrorism against America in the Middle East — the state of Israel — as described in the accompanying story, but he should inquire into the numerous high-level American government policy makers who have already been investigated by the FBI for suspected espionage and illicit influence-peddling on Israel’s behalf.* For the record, they include such prominent figures as:

• Richard Perle, former chief advisor to then-Sen. Henry M. Jackson (D-Wash.), at the time Israel’s foremost advocate in Congress, and later assistant secretary of defense for international security policy in the Reagan administration and chairman of the Defense Policy Board under GeorgeW. Bush;

• Jane Harman, former California congresswoman, now head of the Woodrow Wilson Center, which is highly influential on U.S. foreign policy. Aside from the infamous former Navy Department-based spy for Israel, Jonathan Pollard, serving a life prison term, multiple American Jews in the military and U.S. intelligence in recent years have been investigated, disciplined, or otherwise convicted outright of various forms of disloyalty, including two of the more notable:

• David Tenenbaum, a Defense Department employee whose security clearance was revoked over suspicions regarding his perceived devotion to Israeli interests; and

• Ben-Ami Kadish, a mechanical engineer for the U.S. Army, who was convicted of relaying U.S. defense secrets to Israel from 1979 to 1985, including nuclear secrets. He was never punished for his treason, ostensibly due to his advanced age. 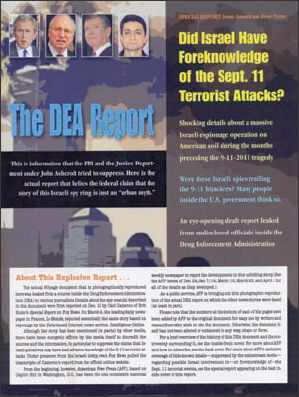 AFP presents — for the first time ever — an unredacted, uncensored reprint of the controversial report leaked from inside the Drug Enforcement Administration (DEA) exposing a wide-ranging Israeli spy ring operating on American soil prior to the 9-11 “terrorist” tragedy.

Previous editions of the report released by AFP and circulated by others on the Internet were redacted — that is, portions were “blacked out.” But those redactions aren’t in this one. All the facts are there for you to see. Here’s the story:

Due to an unexpected computer “miracle,” when AFP ran out of copies and sent the report back to the printer, a “techie” at the printing company discovered that the scanning process removed all of the redactions. So AFP said, “do it” and the redactions were excised and now you can read the previously suppressed information.

The wide array of evidence presented in this report confirms the fact — still unknown to the public at large — that Israeli intelligence operatives in the United States (posing as “art students”) were engaged in nationwide spying on government facilities and other institutions in the period preceding the 9-11 attacks.

But what makes the report most explosive is that the report demonstrates that these Israelis were surveilling the alleged 9-11 hijackers prior to those attacks.

And while there are some who doubt the alleged identities of the 19 individuals officially named as the hijackers, there is no question that the Israeli operatives were on top of persons whose names have been linked to 9-11 by the U.S. government version of events.

The story of the “art students” has become almost legendary among serious independent investigators of 9-11, despite the fact the U.S. government and the mass media have done their utmost to keep it under wraps. At one point, spokesmen for then-Attorney General John Ashcroft — a fanatic supporter of Israel — even claimed the story was “an urban myth,” and that there were no such “art students.”

In fact — although this is not mentioned in the report — some of those “art students” visited the headquarters of the newspaper, The Spotlight, whose editors launched AFP upon The Spotlight’s demise in 2001. Arriving without notice, they offered to sell artwork at discount prices that they said had been intended for delivery “at the bank across the street” but the bank had rejected it.

While in The Spotlight office they were full of questions and obviously very alert to the activities therein, causing one “conspiracy theorist” on The Spotlight staff — this author, in fact — to suspect these students were Israeli agents on a training mission.

It was only later it was learned that these same “art students” and their colleagues were indeed Israeli agents — thanks to the patriot inside the DEA who released the report that AFP is now making available once again.

‘U.K. didn’t always feel safe to share intelligence with Israel’ Speaking at conference marking 60 years of U.K.-Israel ties, former MI6 chief says he has no doubt Israeli intelligence ‘plays by a different set of rules’ than those observed in London.

Minister Louis Farrakhan of the Nation of Islam is Right!

Why aren’t responsible Republicans and Democrats talking like Farrakhan? A lot of people don’t like Farrakhan—that’s their problem—but he’s virtually the only public figure in America today of any consequence who has laid the facts about the Libyan crisis on the line.

On tonight’s broadcast, Michael Collins Piper gives his 100% endorsement to Minister Farrakhan (whom Piper has met on a number of occasions) and urges sensible Americans to pay heed to Farrakhan’s words.

Louis Farrakhan reminds us that the American government murdered Americans at Waco as well. How many American politicians would dare to say that?

Through the Federal Reserve and the Controlled Media a small handful of criminal families and big money interests who are wedded to the global Zionist agenda (often called « the New World Order« ) are strangling the American people financially and spiritually and murdering their sons and daughters in needless foreign wars that isolate America from the rest of the world.

And now that the United States has essentially said that it’s « okay » for people to rebel against their governments—illustrated by the U.S. support for the rebels in Libya—maybe it’s time for the American people to rebel!

And, by the way, another thought: If the United States really supports freedom fighters, why in the name of God haven’t we gone into Israel and isolated and strangled that government that oppresses the Christians and the Muslims? After all, isn’t the United States « for democracy »?

Piper says that it’s time to institute a nationwide « Synagogue Watch » identifying the people and forces that are attempting (quite successfully, if truth be told) to use their political influence to get the United States into foolish foreign wars. After all, Piper points out, some very well-known and respected synagoguers in America have been implicated by the FBI for spying and espionage on behalf of a foreign nation—Israel—guilty of treason. These synagoguers are known to have worked to bring the police state to America—through the mis-named « Patriot Act » and are working assiduously to ensconce themselves as the first and foremost political force in America. It’s time, Piper says, to stop them. And to stop them, we need to identify them—now, before it’s too late.

THE JUDAS GOATS – THE ENEMY WITHIN: The Shocking Story of the Infiltration and Subversion of the American Nationalist Movement