Posted on 23 octobre 2011 by pascasher.the-savoisien.com

If the Arab Spring is such a threat to Israel, why are so many pro-Israelis involved in promoting democracy in the Middle East?

VIDEO – ‘Liberation machine’ is being turned against Syria

How easily Israel can discredit an Arab leader

Three Israel Partisans and a Token Arab: Whither the Arab Spring?

The Price of “Freedom” in Syria: Ending Resistance to Israel?
As in Libya, the price for Israel lobby-induced Western support for the “revolution” in Syria is accommodation with Tel Aviv. Commenting on the implicit admission of this quid pro quo by Syrian National Council president Burhan Ghalioun in an interview with the stridently pro-Israel Wall Street Journal, Ibrahim al-Amin, editor-in-chief of al-Akhbar, rightly wondered if this is “A Revolution against Resistance?”
VIDEO – LIBYA BHL The Founding Father Of New Libya Says It Can’t Be Bad For Democracy, Israel & The Jews

Joe Lieberman and Al-Qaeda, United on Syria (and other wars of ‘Muslim liberation’)
US ‘used NGOs to create chaos in Egypt’: minister

Regime Change in Libya and the National Endowment for Democracy: A Nexus of Terrorism and Human Rights

In “America’s Conquest of Africa: The Roles of France and Israel,” Mahdi Darius Nazemroaya and Julien Teil describe NED’s collaboration with some unsavoury characters to supposedly bring “democracy” to the Libyan people:

Since 2001, the U.S. has falsely presented itself as a champion against terrorism. The Trans-Saharan Counterterrorism Initiative (TSCTI), which opened the doors for AFRICOM in Africa, was justified as necessary by Washington to fight organizations like the Salafist Group for Preaching and Combat (GSPC) in Algeria and the Libyan Islamic Fighting Group (LIFG) in Libya. Yet, Washington is cooperating and using these very same groups in Libya, along with the National Front for the Salvation of Libya and the Muslim Brotherhood, as foot soldiers and proxies. Moreover, many of the key Libyan individuals that are members of the National Endowment for Democracy (NED) are members of these groups and have also been part of conferences and longstanding plans pushing for regime change in Libya.

Read the rest of this entry »

Almost three years ago, Richard Perle, also known as “Prince of Darkness,” brazenly attempted to deny his own existence as a leading pro-Israel architect of the Iraq war, when he stated, “There is no such thing as a neoconservative foreign policy.” Now, the “nonviolent” manifestation of that regime change agenda appears to be following suit.

On January 4, Bloomberg Markets magazine noted Peter Ackerman’s efforts to apply his longstanding “passion for grass-roots democracy” around the world to the American political scene in a surprisingly critical report entitled “Internet Picks Presidential Candidate If Ackerman Gets His Way.” In the article, Kambiz Foroohar explains:

Ackerman, 65, who made more than $300 million working alongside Michael Milken at Drexel Burnham Lambert Inc.’s Beverly Hills, California, offices in the 1980s, is Americans Elect’s chairman and top donor. He wants to circumvent U.S. politics-as-usual by letting voters choose a presidential candidate via the Internet who, with a running mate from a different political party, will appear on every state ballot for the 2012 election ….

Foroohar goes on to highlight what appears to be the multi-millionaire businessman’s primary enterprise:

Clearly displeased with the negative publicity, Ackerman’s external “democracy promotion” vehicle issued a number of “Corrections ” to the Bloomberg report in its “Setting the Record Straight” section:

This article creates the false impression that the International Center on Nonviolent Conflict (ICNC) may be “training dissidents to overthrow dictatorships,” in the words of a businessman it quotes who has had no contact with the Center. In fact, ICNC does not now “train dissidents” and has not supported workshops abroad for nonviolent activists since 2009.
The article also claims that ICNC’s founding chair, Peter Ackerman, “has funded workshops for dissidents from Central Asia, Iran, Iraq and North Korea,” and leaves the impression that ICNC may have supported “civil resistance training” for “members of Egypt’s April 6 movement” through the Center for Applied Nonviolent Action and Strategies (CANVAS) in Belgrade. None of this is accurate.

When Egypt’s April 6 Youth Movement was struggling to recover from a failed effort in 2005, its leaders tossed around “crazy ideas” about bringing down the government, said Ahmed Maher, a leading strategist. They stumbled on Mr. Sharp while examining the Serbian movement Otpor, which he had influenced.
When the nonpartisan International Center on Nonviolent Conflict, which trains democracy activists, slipped into Cairo several years ago to conduct a workshop, among the papers it distributed was Mr. Sharp’s “198 Methods of Nonviolent Action,” a list of tactics that range from hunger strikes to “protest disrobing” to “disclosing identities of secret agents.”
Dalia Ziada, an Egyptian blogger and activist who attended the workshop and later organized similar sessions on her own, said trainees were active in both the Tunisia and Egypt revolts. She said that some activists translated excerpts of Mr. Sharp’s work into Arabic, and that his message of “attacking weaknesses of dictators” stuck with them.
Peter Ackerman, a onetime student of Mr. Sharp who founded the nonviolence center and ran the Cairo workshop, cites his former mentor as proof that “ideas have power.”

Continuing its attempt to set the record straight, the ICNC explains what it does:

We furnish a wide range of educational materials and information to educators, journalists, international institutions, civil society groups, and people involved in campaigns or movements for rights and justice, who request that information. It does this work primarily through seminars at universities, presentations and briefings, graduate and undergraduate curricula, online learning platforms, and webinars, as well as direct and indirect dissemination of books, reports, articles, audio files, films, videos and a video game, “People Power: The Game of Civil Resistance.”

Presumably, disseminating “People Power: The Game of Civil Resistance” has absolutely nothing to do with “training dissidents to overthrow dictatorships.”

Yet in an April 2005 profile of Peter Ackerman in The New Republic, aptly entitled “Regime Change, Inc.,” a leader of Georgia’s “Rose Revolution” testifies to the efficacy of “Bringing Down a Dictator,” a documentary film (also available in Arabic) that “originated” with Ackerman:

“Most important was the film. All the demonstrators knew the tactics of the revolution in Belgrade by heart because they showed [the film]…. Everyone knew what to do.”

That Ackerman is a part of the U.S. foreign policy elite and integral to the new modalities of intervention under the rubric of “democracy promotion,” etc., is beyond question. There is nothing controversial about that and anyone who believes otherwise is clearly seriously misinformed or just ignorant.

We eagerly await the International Center on Nonviolent Conflict’s “correction” of this piece. It wouldn’t be the first time that Ackerman’s “independent, non-profit educational foundation” took issue with something this writer has written about the ICNC’s “educational” work. Hopefully, they won’t again resort to smearing my work (based on a calculated misrepresentation of one tangentially related article) in a transparent attempt to deflect attention from a critique of their own.

Maidhc Ó Cathail is a political analyst and editor of The Passionate Attachment.

Carl Gershman, longtime president of the National Endowment for Democracy, worked in the research department of the Anti-Defamation League of B’nai B’rith during the second half of 1968. “Research,” as the 1993 San Francisco case revealed, can be a convenient euphemism for the ADL’s spying on Israel’s perceived enemies.
Speaking at the ADL’s 2004 Rome conference on “Anti-Semitism – A Threat to Democracy,” Gershman revealed a pro-Israeli motivation behind his promotion of “democratic reform” in the Middle East. “Whatever their differences,” said NED’s president, “the Baathists and Islamists share a visceral hatred of liberal values that finds its most potent expression in the vilification of Israel and the Jewish people.”
Pro-democracy activists in the Middle East who have been “quietly nurtured” by NED would be well advised to do a little more research themselves on who is supporting their uprisings, and why. And those who support them in the hope that they might pose a threat to Israeli hegemony should ask themselves why ardent Zionists like Carl Gershman have worked long and hard to promote “democracy” in the region.

“The same activities have been carried out in Belarus for at least 12 years and haven’t produced very much,” he told AFP. “This idea that there is some kind of sinister technology that very quietly, the US or certain European actors go into countries and prepare them for revolution, is colorful and sounds like a good spy movie.” Just because they haven’t succeeded in bringing down Lukashenko yet, the Egyptians must be fantasists!
Lest We Forget—Egypt’s Revolution-Creative Destruction For A ‘Greater Middle East’?

Israel Lobby Think-Tanker: ‘Most’ Syrian People ‘Rising Up Against the Regime’ — Why are these Israeli agents allowed to hide behind neutral-sounding names like the Washington Institute for Near East Policy?

Article original en anglais : Preparing the Chessboard for the « Clash of Civilizations »: Divide, Conquer and Rule the « New Middle East »

In the meantime, however, Sharansky’s influence on American Republicanism—under George Bush and in the years ahead—remains substantial. In fact, there’s a new brand of Republicanism, at least according to Ken Mehlman, whom President George W. Bush personally hand picked, following the 2004 election, to serve as chairman of the Republican National Committee.
In a March 14, 2005 speech in Washington to the American Israel Public Affairs Committee (AIPAC), the lobby for Israel, the GOP’s national chairman candidly and enthusiastically described himself as a “Sharansky Republican.”
What was so striking is that this appeared to be the first time in American history that the chairman of one of the national parties used the name and ideology of a political leader from a foreign nation—one known as an “extremist” at that—to describe his own ideology.
In the past, there were self-described “Taft Republicans,” who supported the presidential ambitions of the nationalistic and traditionally conservative Sen. Robert Taft of Ohio—popularly known as “Mr. Republican”—who was the undisputed leader of the America First bloc in Congress from 1936 until his untimely (and some say “suspicious”) death in 1953.
Later, there were the conservative “Goldwater Republicans”who—under the leadership of Sen. Barry Goldwater (Ariz.)—set the stage for the ascendancy of the “Reagan Republicans” who came to power in 1980 under the popular two-term president, Ronald Reagan.
At the same time, in opposition to the Taft and Goldwater Republicans, there were the more liberal and internationalist-minded Republicans who rallied behind New York Governor Thomas E. Dewey and Wall Street lawyer Wendell Willkie,dubbing themselves—naturally—“Dewey Republicans” and “Willkie Republicans.”
And later, of course,many of those same party leaders evolved into “Rockefeller Republicans” following New York Governor Nelson Rockefeller. And there were even a few folks, for a time, who called themselves “Eisenhower Republicans,” stressing their so-called “mainstream, moderate” point of view (however defined) in the spirit of America’s 35th president, Dwight D. Eisenhower.
Now, however, the new GOP national chairman is not calling himself a “Reagan Republican” or even a “Bush Republican” (after the reigning GOP president who is wildly popular among grass-roots members of his party), but, instead, is hailing a foreign leader—a known extremist—as the role model for what 21st century Republicanism is all about.
And this is a direct legacy of George W. Bush who so proudly installed Sharansky as one of the GOP’s ideological dictators, betraying the historic legacy of the GOP. Sharansky’s policy of promoting “global democracy”is hardly in the American tradition, but it’s now part and parcel of what the “modern” Republican Party is all about.

Michael Collins Piper, The Caiaphas Complex—An Unsettling, Unexpurgated Exploration of the Dark Side of the Power Structure That Misrules Our World Today, p. 199-212: 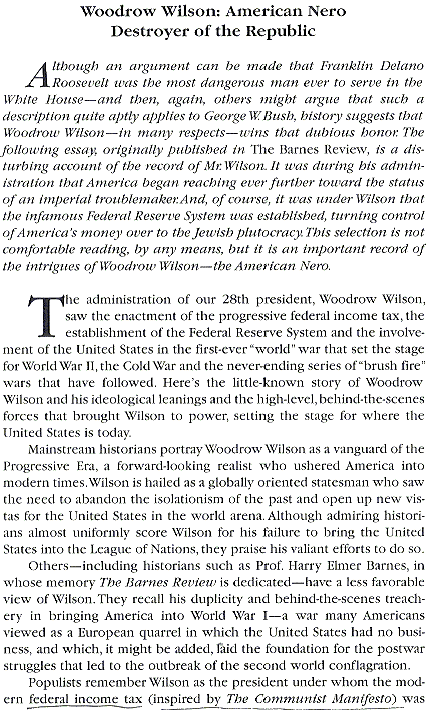 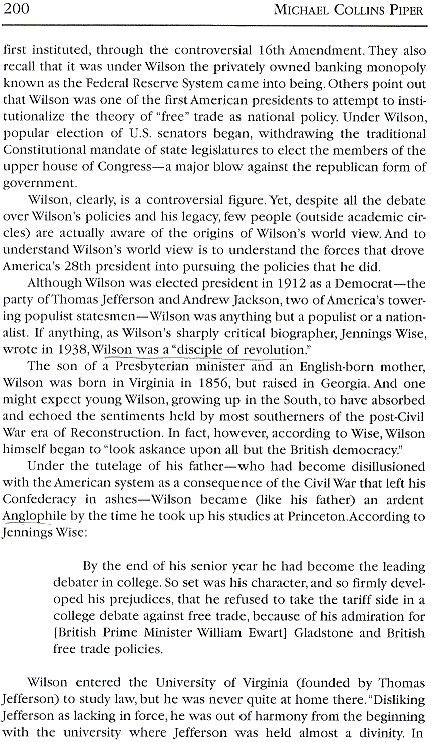 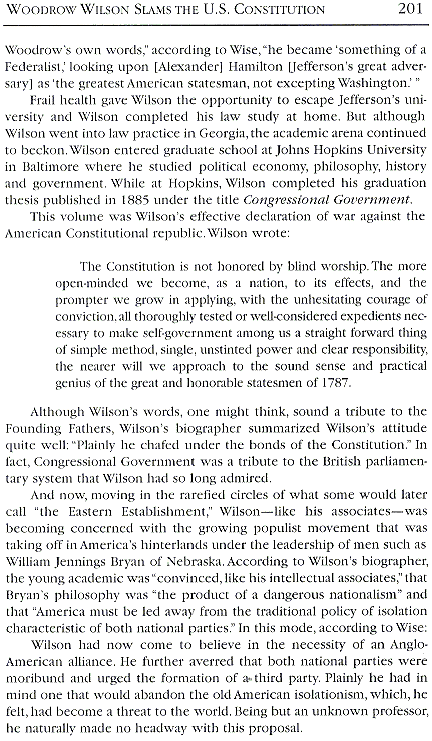 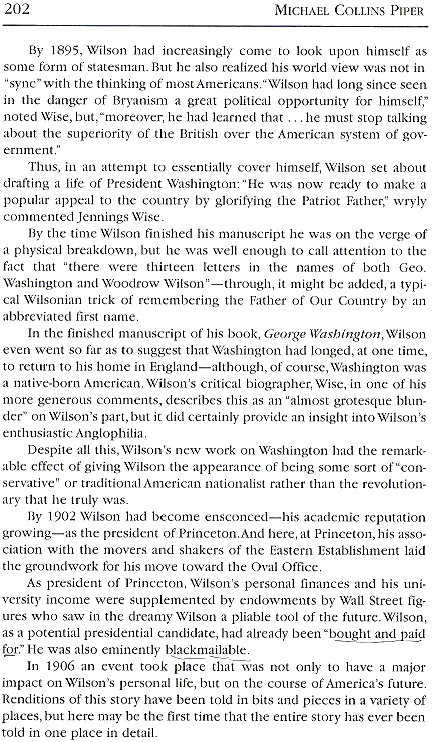 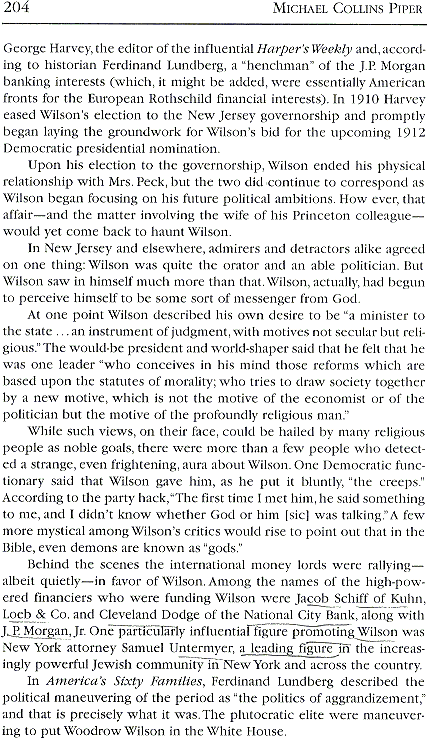 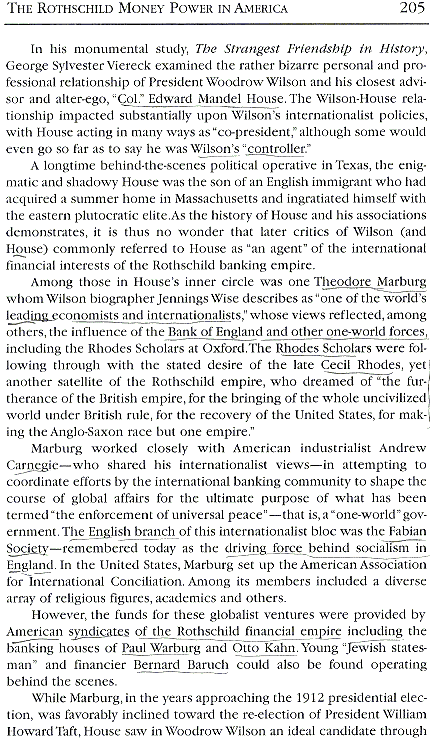 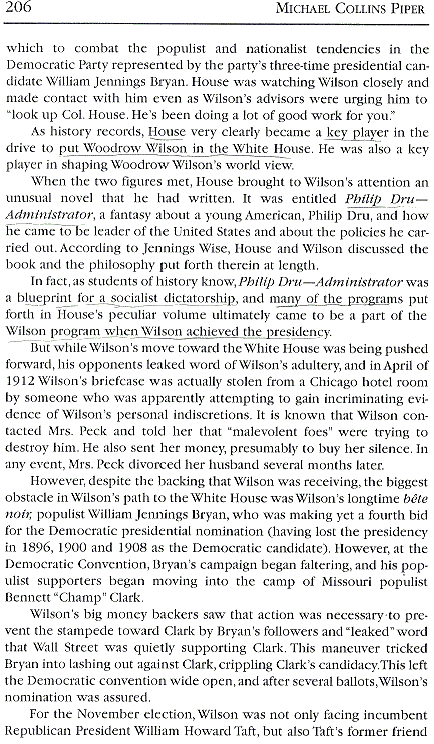 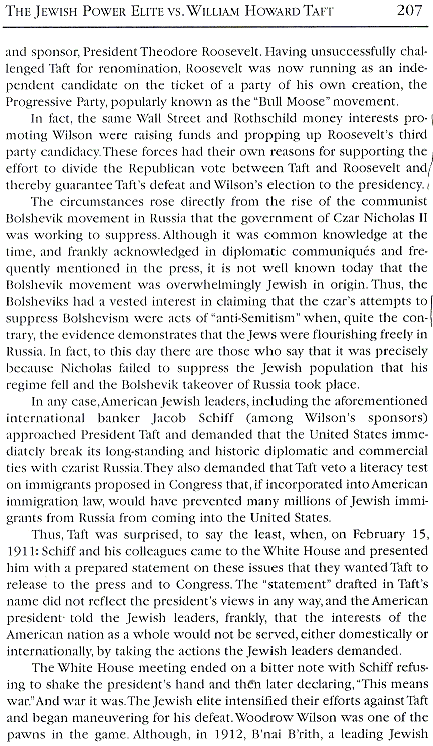 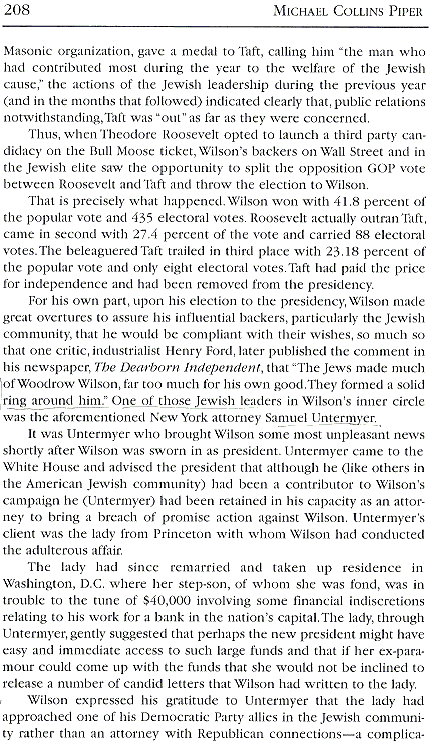 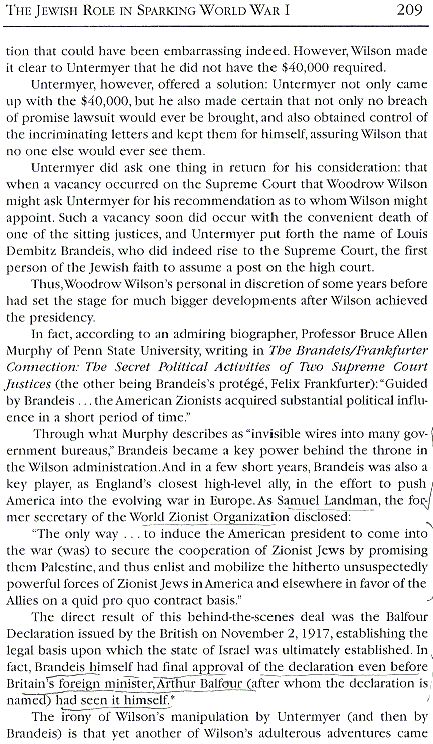 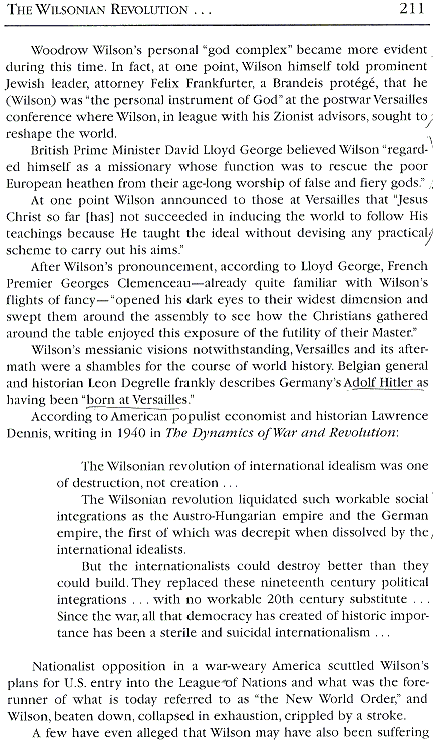 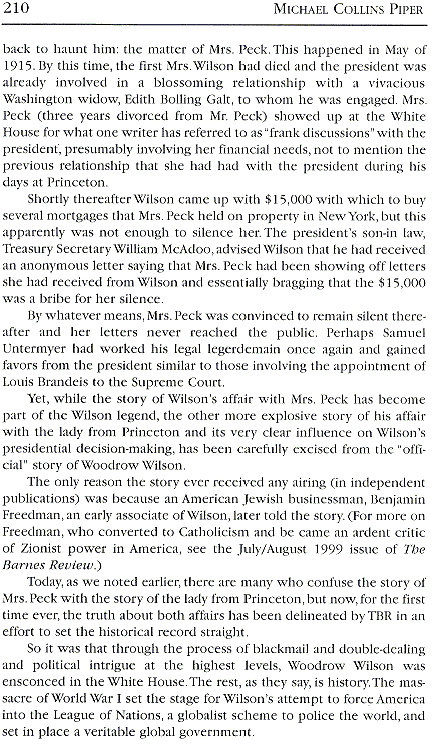 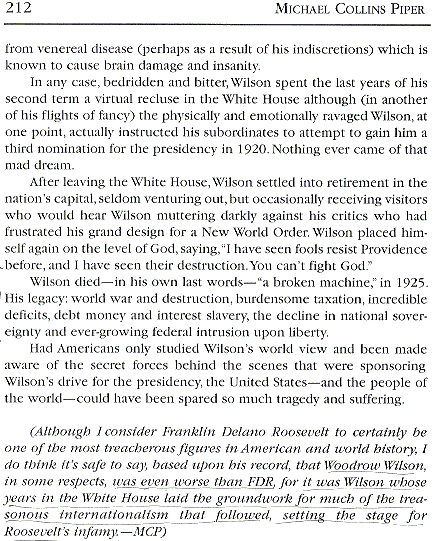