« During the twentieth century, the world tried twice to establish international organizations to deal with global problems, with the League of Nations and later the United Nations. These organizations were founded to unite a world that was alienated along state and ethnic lines and to contain national conflicts in an age that was characterized by such conflicts. These conflicts are not what typify the world today. The fault lines today are along identity and religious beliefs, and therefore it is time to establish a World Religion Organization. It sounds oxymoronic, especially considering today’s escalation of inter-religious hostilities. It is also almost impossible, considering the union of the world’s religions in their opposition to gay parades, freedom of speech, family planning and the acceptance of beliefs and traditions of others. Nevertheless it is essential, as the alternative is widening world conflicts.(…) The World Religion Organization can be established in Israel on an international sovereign land to express its own nature and authority. » (Avraham Burg, The Holocaust Is Over; We Must Rise From its Ashes, p.218-219; p.230 dans le PDF)

The Holocaust Is Over; We Must Rise From its Ashes

Modern-day Israel, and the Jewish community, are strongly influenced by the memory and horrors of Hitler and the Holocaust. Burg argues that the Jewish nation has been traumatized and has lost the ability to trust itself, its neighbors or the world around it. He shows that this is one of  the causes for the growing nationalism and violence that are plaguing Israeli society and reverberating through Jewish communities worldwide. Burg uses his own family history–his parents were Holocaust survivors–to inform his innovative views on what the Jewish people need to do to move on and eventually live in peace with their Arab neighbors and feel comfortable in the world at large. Thought-provoking, compelling, and original, this book is bound to spark a heated debate around the world.

Infamous ‘Nazi Diary’ Turns Out to Be a Dud
August 16, 2013
• Researchers want to know how much material has been excised from philosopher’s manuscript In fact—at least from the standpoint of propping up the story of the Holocaust as it has been set down by the mass media on a non-stop daily basis—the diary is essentially a great big fat flop.
Although the 400 pages of the diary were turned over to the United States Holocaust Memorial Museum—which claims for public relations purposes to be “privately funded” but which is largely bankrolled by U.S. taxpayers—no major revelations have emerged, quite in contrast to the way the discovery was first trumpeted.
Media voices reported breathlessly that the diary was sure to be a treasure trove of shocking new data, particularly since Rosenberg—hanged following his conviction for war crimes at the post-World War II “victor’s vengeance” tribunal at Nuremberg—had been minister for the eastern territories occupied by German forces where there were many work camps and other installations that are central to the stories surrounding the era.
Newspaper and broadcast audiences—and the followers of Internet bigmouths who always talk about “the Nazis”—were led to believe the diary might be the final nail in the scaffold and assuredly prove—serious questions raised by a host of scholars worldwide notwithstanding—that the numbers of Jews said to have been gassed, shot, electrocuted, starved and otherwise worked or terrified to death was at least the vaunted number of “Six Million” and probably higher.
(Over the years the “official” number of just Jews alone reported to have been dispatched to their doom by the Third Reich has ranged from as high as 20 million to 10 or 12 million, with the figure of Six Million looming most prominently. However, in recent years, Jewish sources have tried to ramp the figure back upward, leaving many trusting members of the public confused as to what the “official” figure really is.)
Despite all this—and this is what the major media is not reporting— the truth is that there may a very real concern as to what may have been excised from the diary during its “missing years.”
The fact a German-born Jew, one Robert Kempner, had his hands on the diary since most of the period following World War II—up until his death in New York in 1993—may point toward intrigue involving the rewriting or erasing of history that those who have a stake in perpetuating the memory of “the Holocaust” would prefer be ignored.
An assistant U.S. chief counsel during the Rosenberg trial, Kemper was later a prosecutor in one of the subsequent further trials under the Nuremberg tribunal’s auspices and is credited as having “discovered” a document—called the Wannsee Protocol—widely touted as “the proof” of a “Nazi plot” to exterminate the Jews of Europe.  In fact, however, there is serious academic debate about the document’s viability and even some Jewish historians and, recently, one Israeli newspaper, Ha’aretz, have raised questions about the stories surrounding the protocol.
So considering Kempner’s role in the origins of this questionable document, the fact he made off with the Rosenberg diary—ostensibly for research purposes and with the permission of his superiors at Nuremberg—might raise questions about what material—contradicting many of the “official” stories surrounding the Holocaust—Kempner or others may have excised from Rosenberg’s writings.
The truth is that while Kempner’s estate was in limbo, it was discovered the Rosenberg papers had ended up in the hands of others and they were seized by agents of U.S. Homeland Security. And that’s how they ended up in the hands of the “experts” at the Holocaust Museum.
Thus far the most interesting thing reported from the diary is that Rosenberg noted that English diplomats in Berlin for the 1936 Olympics were “angry about the negroes from the USA as they squeeze out the English during the Olympic games.”
And that is an interesting since, over the years, the mass media has repeatedly told the lie that Adolf Hitler “snubbed” black American Olympic runner Jesse Owens whereas Owens himself bragged of how Hitler had waved to him as he passed Hitler’s reviewing stand. Later when the Hitler government published a commemoration of the Olympics, it featured a full-page picture of Owens, describing him as “the fastest man in the world.” 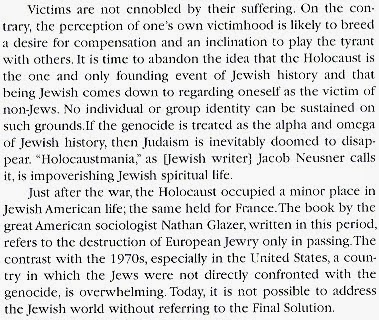 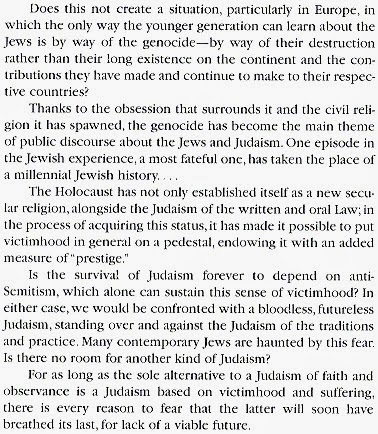 Gilad Atzmon–JESUS IN AUSCHWITZ FOR EASTER

Why is Jesus in Auschwitz?
Video aims to convert Jews to Christianity by portraying Christ as a Holocaust victim.

“New Dimensions in Testimony” aimed at helping future generations converse with survivors after they are gone.

Creating a Holocaust conversation for the future
By Lila Sarick
Wednesday, July 23, 2014