Posted on 27 août 2013 by pascasher.the-savoisien.com 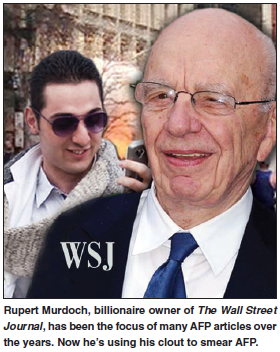 On Aug. 6 a front-page article in The Wall Street Journal (WSJ) sought to implicate AMERICAN FREE PRESS (AFP) as an ideological force that in some way—never quite explained—played a part in instigating the bombing at the Boston Marathon.

The WSJ based its tenuous claim—some call it a “conspiracy theory”—on the fact the late Tamerlan Tsarnaev, the older of the two Chechen-born brothers accused of the bombing, was introduced to AFP by a disabled older American man for whom Tsarnaev’s mother worked as a caregiver and with whom Tsarnaev became friendly and spent time discussing political affairs.

AFP was cited as among the publications—described as “extremist” and focused on “far flung conspiracy theories” relating to 9-11 and the Oklahoma City bombing—found in Tsarnaev’s apartment.

The WSJ was also distressed Tsarnaev may have also had doubts relating to popular stories about the period known as “the Holocaust” and that he even had a copy of the much-publicized Protocols of the Learned Elders of Zion in his possession, a volume often described as being a work of “anti-Semitism.”

The meandering article—a muddled smear—was cobbled together to suggest AFP’s point of view may have influenced the Tsarnaevs and propelled them to violence.

The WSJ did not mention whether Tsarnaev, a Muslim, may have read and been angered by anti-Muslim screeds appearing regularly in the WSJ or in other like-minded pro-Israel publications such as The Weekly Standard, National Review, The Washington Free Beacon or Commentary among many journals that feed readers a steady diet of Muslim-bashing, clearly designed to defame Muslims and much more likely to inflame them.

Published by billionaire Rupert Murdoch, the WSJ also failed to note that Murdoch has a longstanding axe to grind with AFP, going back to the early 1980s when AFP’s editors—then affiliated with The Spotlight—exposed Murdoch as a media “front” for the Rothschild banking dynasty, a fact suppressed in all other accounts of Murdoch’s rise to fortune.

By no coincidence, Murdoch’s top lawyer—Howard Squadron, president of the American Jewish Congress and chair of the Conference of Presidents of Major American Jewish Organizations—also played a pivotal role (at that very time) in the initial stages of a conspiracy to destroy The Spotlight, one that ultimately succeeded.

Was Steeped in Conspiracies

Mr. Tsarnaev’s mother, Zubeidat Tsarnaev, had tried to make ends meet for her family by working as a home health aide after the family arrived in the U.S. in 2003. One of her clients in 2010 was Donald Larking of Newton, Mass., who was disabled after he was shot in the face nearly 40 years ago in the robbery of a convenience store where he worked.

Mr. Larking miraculously survived, but people close to the family said his faculties didn’t. He was intrigued with far-flung conspiracies, they said. He subscribed to newspapers and journals that doubted the Holocaust and described the attacks of Sept. 11, Oklahoma City and the Newtown school as plots by unseen elites, and the U.S. and Israeli governments.

Ms. Tsarnaev began asking Tamerlan Tsarnaev or his brother to care for Mr. Larking when she wasn’t available to work. Mr. Larking’s wife, Rosemary, a quadriplegic, also needed help at home. Mr. Tsarnaev seemed to have found a kindred spirit in Mr. Larking. They became friends and had animated talks about politics, people close to the Larking family said.

The papers included The First Freedom, an Alabama-based newspaper that espouses « equal rights for whites » and whose websites features a Confederate flag. Another was The Sovereign, a New York-based publication that alleges the U.S. is under the sway of Israeli lobbyists, and that Israel and the Department of Homeland Security were « deeply involved » in the Boston bombings. Neither paper returned requests for comment.

Mr. Tsarnaev got his own subscription to American Free Press, a paper that the Southern Law Poverty Center said promotes anti-Semitic conspiracy theories. A spokeswoman for the paper denied it had such an agenda, saying the paper publishes « news that the established media won’t. » She confirmed that someone bought Mr. Tsarnaev a « get acquainted » 16-week subscription in December. It expired in April, at about the time of the Boston Marathon attack.(…)

Terror experts said extremist U.S. literature and Islamist readings may reach vastly different audiences but the themes are largely the same. Both suggest wide-ranging plots by the U.S. and Israeli governments; that time is running out before an intended apocalypse, and heroes must act before it is too late.

Mary Ellen O’Toole, a former profiler for the FBI, said she doubted that Mr. Tsarnaev’s extremist American readings would have formed his opinions but they could have reaffirmed them.

« You have to go a little deeper to understand what he was focusing on, underlining, » Ms. O’Toole said. « What are they writing in the margin? What are they reading over and over again? »

Mr. Tsarnaev also had a marked-up copy of the Protocols of the Elders of Zion, a long-discredited tract penned in Russia at the beginning of the 20th century. It describes an alleged plan by Jewish leaders to take over the world. Mr. Tsarnaev scrawled 22 words he translated from English to Russian on a back page, beginning with « gentile » and ending with « Mason. »

Joanna Herlihy, who rented the apartment to Mr. Tsarnaev and lived two floors below, said he recommended she read it. Ms. Herlihy said she told her tenant to read the notorious origins of the text on Wikipedia, and « now I regret that I didn’t have a follow-up conversation with him. » The literary forgery is believed by historians to have been concocted by a czarist secret police officer.

Mr. Tsarnaev had an interest in a range of unseen forces. In a three-ring binder from his apartment, he printed out articles on hypnosis, and how to influence others with the power of suggestion.

Mr. Tsarnaev underlined chunks of a speed-seduction course by Ross Jeffries, « How To Create an Instantaneous Sexual Attraction in Any Woman You Meet, » including monologues to create an « incredible » connection.

His former brother-in-law, Elmzira Khozhugov, said Mr. Tsarnaev in 2008 was seeking out a copy of the Protocols. That year he took a sharp turn toward Islam, dropping his boxing career and telling friends and family that it was un-Islamic to punch anyone in the face, family and friends said.

Mr. Khozhugov recalled how that year Mr. Tsarnaev visited him at college in Washington state and they spent a week together. They watched the movie « Zeitgeist, » which called the Sept. 11 attacks a plot of power-hungry elites against the U.S.

Mr. Tsarnaev was interested in the so-called techno-utopian Zeitgeist movement, whose adherents believe in the coming collapse of money-based society and the advantages of an economy managed by computers incapable of corruption.

« He was fascinated with it, he was beginning to think that all sorts of things were connected by a conspiracy of some kind, » Mr. Khozhugov said. « If you had a conversation with him, you’d get a feeling that he was still searching, and I’d get the idea that he was going in the wrong direction. »

Mr. Tsarnaev’s uncle, Ruslan Tsarni, said his nephew’s personal setbacks may have also played a role in his turn to religion and conspiracies. Mr. Tsarnaev had few prospects academically or professionally. Before the bombing, he was a stay-at-home father.

The Larkings’ lawyer, Mr. Rosenberg, said the Tsarnaev family grew close to the couple. The father, Anzor, often came to work with his wife and told the Larkings,  » ‘If you ever have trouble with anybody, let me know and I’ll kill him. We Muslims don’t fool around,’  » Mr. Rosenberg said.

Reached by phone in the Russian province of Dagestan, the elder Mr. Tsarnaev denied he ever use the word « kill » but said he reassured Rosemary Larking that he would defend the couple « if anyone gave them any problems. »

Anzor Tsarnaev said his son and Mr. Larking became close because the younger man was raised to respect elderly people.

« That’s the way he was taught, to take care of old people, the weak ones, for everyone, » said Mr. Tsarnaev, who insisted his sons were innocent and framed by a « criminal group. »

Mr. Rosenberg said Mr. Larking made frequent visits to the mosque as a way to « get away from the house. » He said he was able to say things to Mr. Tsarnaev without being told they were « wrong or untrue. »

After the marathon bombing, Mr. Rosenberg said, Mr. Larking recognized the two brothers in photos circulated by the FBI. Mr. Larking immediately had a health aide call authorities and identify them.

Mr. Larking is « in complete denial about what happened, » said Ms. Mossalam, the mosque spokeswoman.

« He is a vulnerable member of our community and we want to make sure that everyone knows he is a very sweet and innocent man, » she said. « I don’t think that he ever thought that his views would ever cause anyone harm. »

MSNBC: Bombing Suspects ‘Not Radical Jihadists’, But One Rather an ‘Alex Jones’ Fan

On the Subject of 9/11 Shills and Disinfo: the case of Bollyn and Hufschmid

While the researchers have preoccupied themselves with how the assassination was accomplished, there has been almost no systematic thinking on why President Kennedy was killed. »

–Vincent J. Salandria, Attorney Philadelphia, Pa. Based on an address at the conference of the New

England Branch of the Women’s International League for Peace and Freedom, Cambridge,

The sloppy ‘research’ done by so many in the ‘truth movement’ and how it is utilized by our enemies against us.

Book Excerpt: Among the Truthers by Jonathan Kay

« All of the tiny little islands of paranoia suddenly were linked up by virtual causeways. One result is that elaborate conspiracy theories now can be cobbled together literally overnight through the efforts of hundreds of scattered dilettante conspiracists. Another result is that conspiracists all around the world now tend to focus on the same few dozen talking points that figure prominently on the top websites.

The Internet has produced a radical democratization of the conspiracist marketplace of ideas. No longer does one have to spend years researching and writing a book to attract attention: One can simply set up a blog, or chime in on someone else’s, with some refinement of the existing collective lore. In fact, today’s conspiracists don’t even have to read books — they can pick up all their talking points from Truther websites, or, better yet, from Truther propaganda videos. (…)

This dumbing-down effect explains the downward shift in the age profile of conspiracists: While influential JFK conspiracy theorists tended to be bookish middle-aged eccentrics, many of the Internet’s noisiest Truthers are barely old enough to shave: Conspiracism is something they fit in between video gaming and Facebook surfing.

–Excerpt from Among the Truthers by Jonathan Kay © 2011.

Published in Canada by HarperCollins Publishers Ltd. All rights reserved.

« As this positive social feedback becomes addictive, the conspiracist’s network of enablers grows often to such a point that it crowds out the conspiracy theorist’s nonbelieving friends. The process resembles the formation of an electronic cocoon that envelops a conspiracist with codependents. »

-« Among the Truthers », Jonathan Kay