Posted on 10 octobre 2017 by pascasher.the-savoisien.com 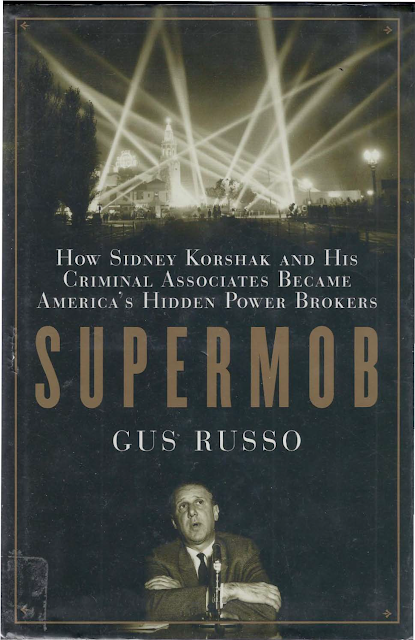 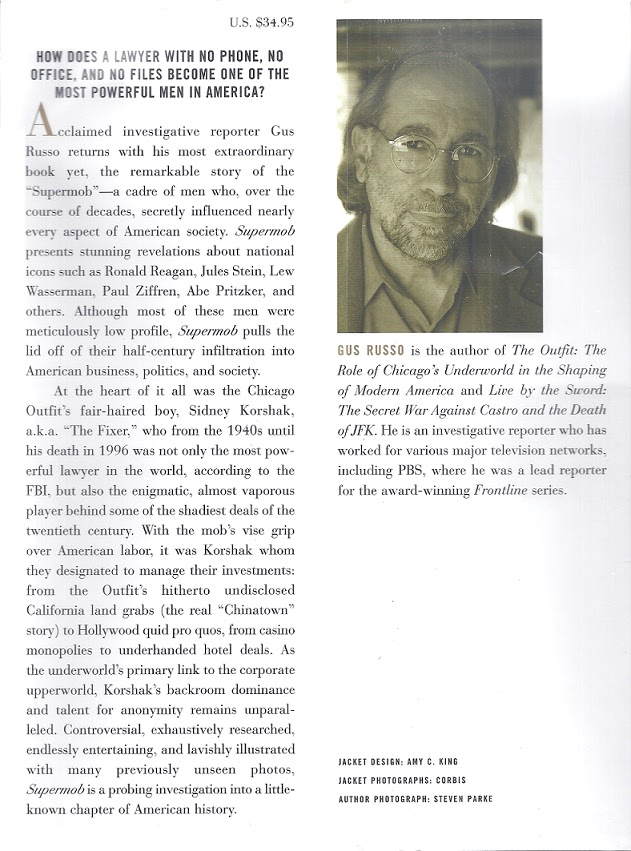 Su-per-mob (soo-per-mahb) n. a group of men from the Midwest, often of Russian Jewish heritage, who made fortunes in the 20th century American West in collusion with notorious members of organized crime.

TWO TYPES OF POWER dominated the twentieth century: the visible, embodied in politicians, corporate moguls, crime bosses, and law enforcement; and the invisible, concentrated in the hands of a few power brokers generally of Eastern European and Jewish immigrant heritage. Operating safely in the shadows, these men often pulled the strings of the visible power brokers. Although they remained nameless to the public, they were notorious among a smattering of enterprising investigators who, over decades, followed their brilliant, amoral, and frequently criminal careers. The late Senate investigator and author Walter Sheridan dubbed them the Supermob.

For all their power, this covert cadre of men had a surprisingly monolithic pedigree. They shared an ancestral lineage traceable from the former Russian-mandated Jewish ghetto known as the Pale of Settlement, emigrating first to the Maxwell Street-Lawndale sections of Chicago, and ultimately to what could be termed the Third Settlement, Beverly Hills, California. While they were nomadic to the degree that they followed the money, from Lake Shore Drive to the Vegas Strip to Beverly Hills, the Supermob largely succeeded in creating better, and more legitimate, lives for their offspring. In the process, they became quintessential capitalists, exerting such far-flung influence that the repercussions were felt by practically every American of their era, with an economic impact that could only be measured in the trillions of dollars. Through deniable, often arm’s-length associations with the roughneck Italian and Irish mobsters imprinted in the popular imagination, the Supermob and the hoods shared a sense of entitlement regarding tax-free income. This « Kosher Nostra » stressed brains over brawn and evolved into a real estate powerhouse, an organized-labor autocracy, and a media empire. If power does, indeed, corrupt, then the Supermob corrupted absolutely. Through methodically nurtured political ties, the Supermob effectively insulated itself from prosecution. They were above the law.

They had names like Korshak, Arvey, Greenberg, Pritzker, and Ziffren. Within this Supermob, Jake Arvey was the visionary kingmaker, the patriarchal Chicago ward boss who inspired his own young wards-prodigies like Sid Korshak, the sphinxlike operator who quietly kept the wheels of the enterprise greased, or Alex Louis Greenberg, Paul Ziffren, and the others who plunged into stealthy entrepreneurships that made up the engine of this hidden economy. Although they propelled the making of the movies we watched, the music we listened to, the politicians we voted for, and the hotels and resorts we frequented, it is a testament to their genius that most Americans never heard of any of them.

Forget everything you think you know about the Mafia as it’s been commemorated in such Hollywood extravaganzas as the famous Godfather trilogy. That’s all Tinseltown legend — some might even say “propaganda.” The truth about the organized crime syndicate in America goes much higher and deeper and in directions the mass media is not likely to ever tell you about. And if you have any doubts about it, you need to read the fascinating new book, Supermob, by veteran investigative journalist Gus Russo, who may well have put his career on the line by daring to write this stunning overview of a seamy history you’re not supposed to know about.
. . .Did you know that Ronald Reagan owed his early career in the entertainment industry and later his political career in California to a group of gangsters (many of them of Russian Jewish — not Italian-American — origin) who started out in Chicago and in other Midwestern cities such as Cleveland and Detroit? Well, that’s a fact, and in Supermob, Russo tells the story as it’s only been hinted at before.
. . .This group of gangsters and their associates, including union officials, attorneys, real estate developers, construction tycoons, hotel kings and military contractors — among other wheeler-dealers — played a major role (open and not-so-open) in the development of the casino industry in Las Vegas and in the rise of the motion picture industry as we know it today. Russo tells the story. You’ll be amazed by the wide-ranging connections of this sordid group that’s been called “The Kosher Nostra” (not to be confused with “Cosa Nostra”).
. . .Did you know that during World War II — and in the years that followed — this tightly-knit clique utilized its contacts in the federal Office of Alien Property to grab control of vast amounts of real estate and other assets that previously belonged to Japanese-Americans who were taken into custody by the Franklin Roosevelt administration and put in concentration camps on American soil? At the end of the war, one of the Supermob’s “inside” men — later a “respected” federal judge — was responsible for steering this confiscated property — now worth literally billions of dollars — into this hands of this crime-connected network.
. . .Once you’ve read Russo’s account of what happened to the Japanese-Americans, you’ll find it difficult to continue listening to the complaints about the confiscated properties of Jewish people in Europe (many of whom are living in Israel today) without recalling Russo’s expose of how Jewish-American gangsters and their associates (many of whom emerged as key supporters of the Israeli lobby in the United States) managed to amass billions of dollars in confiscated Japanese-American property.
. . .Russo’s book, which is subtitled “How Sidney Korshak and His Criminal Associates Became America’s Hidden Power Brokers,” hinges on the life and crimes of Chicago mob lawyer Sidney Korshak. However, it’s a story that’s much bigger than one man. Korshak relocated to California and became a top-of-the-line mover and shaker in the motion picture world, socializing with the Hollywood elite (including Ronald and Nancy Reagan) and acting as a proverbial “fixer” whose powerful reach stretched deeply into the organized crime milieu in which he operated, branching out into the complex and inter-connected worlds of finance and industry with organized crime always lurking in the background.
. . .And as Russo points out, the deeds of Korshak and company resulted in repercussions that “were felt by practically every American of their era,” not the least of which was the rise of Ronald Reagan to the presidency, setting the stage for much of the intrigue across the planet today.
. . .While in the realm of organized crime, Italian-American names were plastered across newspaper headlines and in filmland, the truth is, as Russo makes clear, this Supermob — this small handful of Jewish figures of Russian origin — “often pulled the strings of the visible power brokers” and yet, ironically, “most Americans never heard of any of them.”
. . .Now, Russo’s book sets the historical record straight in a trailblazing work that will leave you reeling. Russo writes:
. . . “Through deniable, often arm’s-length associations with the roughneck Italian and Irish mobsters imprinted in the popular imagination, the Supermob and the hoods shared a sense of entitlement regarding tax-free income.
. . . “This ‘Kosher Nostra’ stressed brains over brawn and evolved into a real estate powerhouse, an organized-labor autocracy and a media empire. If power does, indeed, corrupt, then the Supermob corrupted absolutely.
. . . “Through methodically nurtured political ties, the Supermob effectively insulated itself from prosecution. They were above the law . . . They propelled the making of the movies we watched, the music we listened to, the politicians we voted for, and the hotels and resorts we frequented. . . .” [The End] 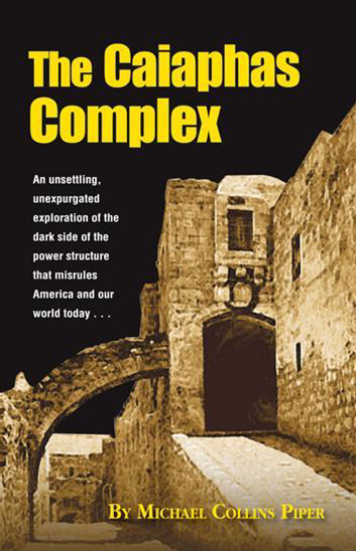 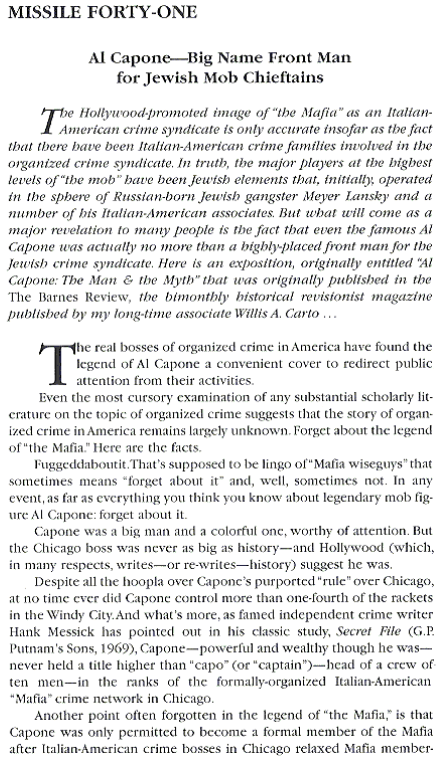 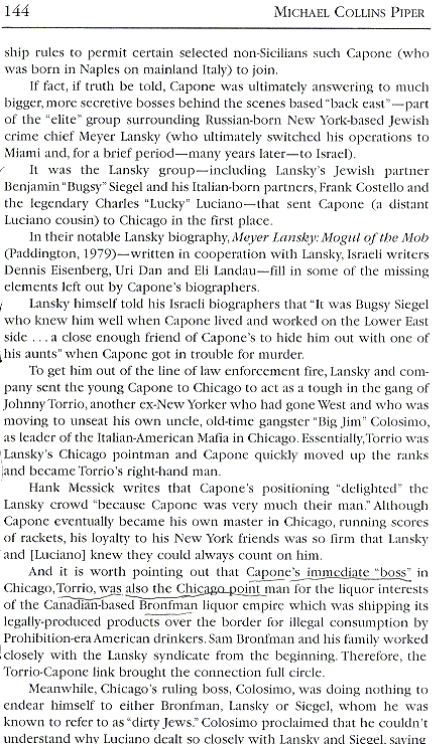 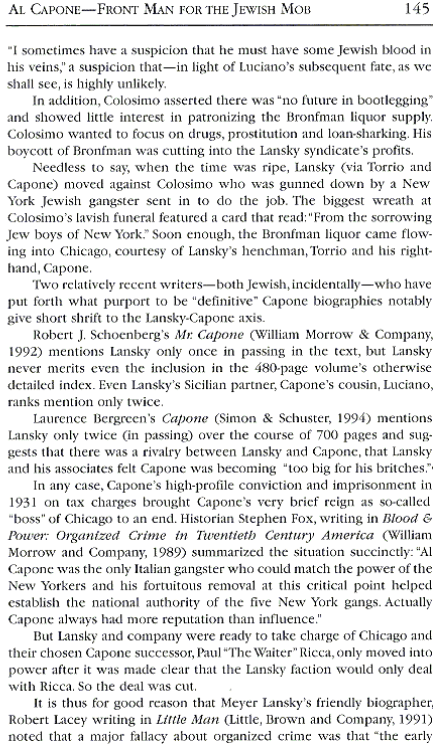 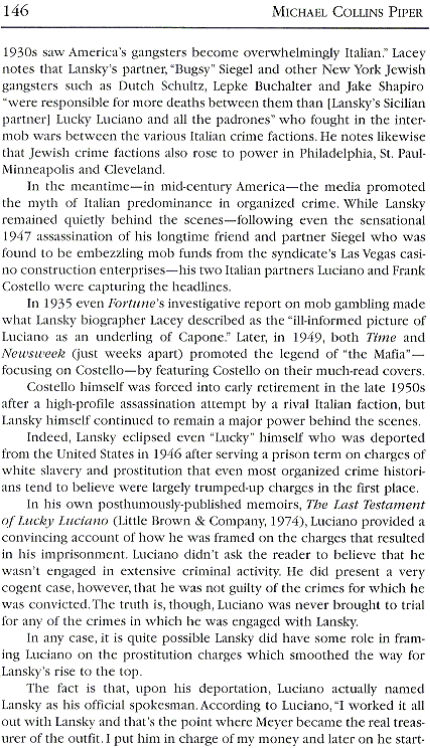 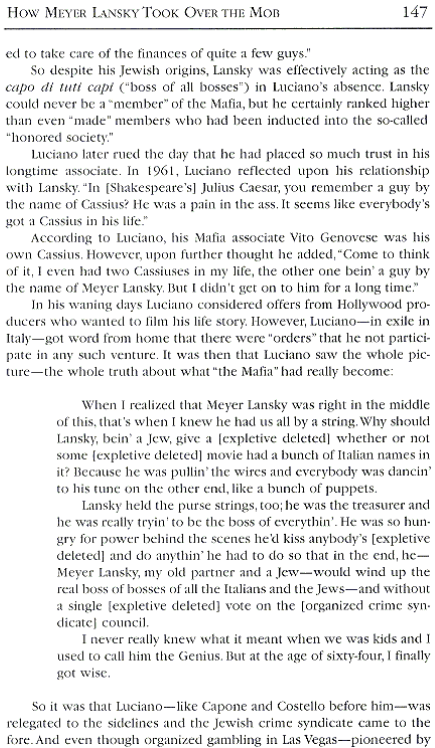 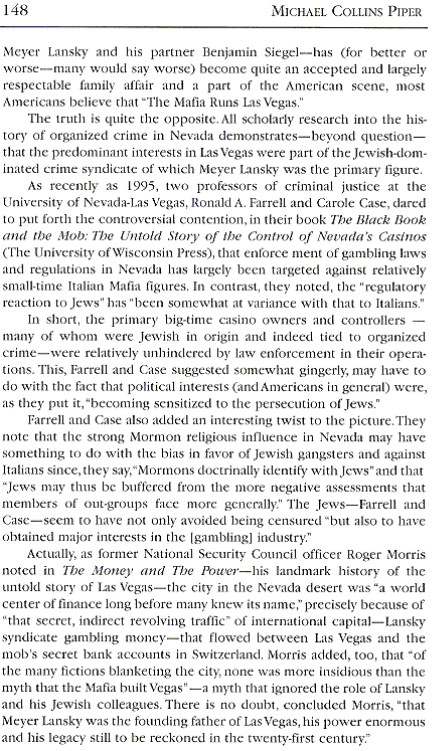 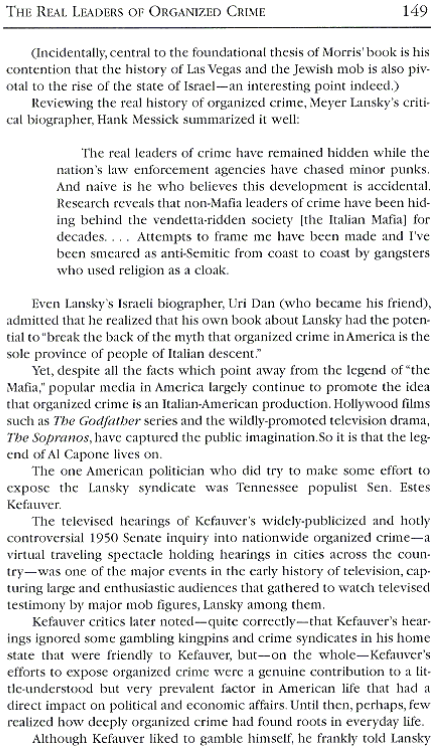 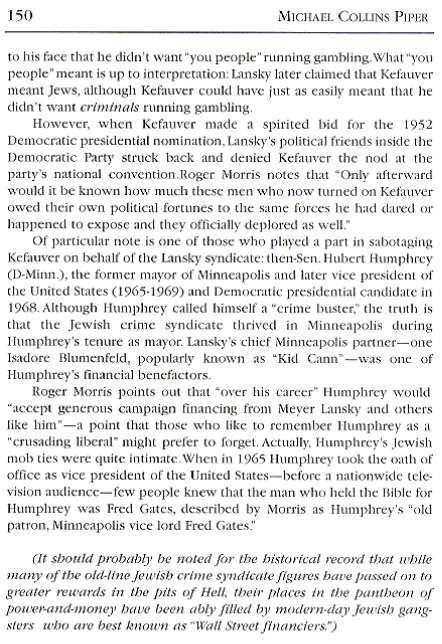 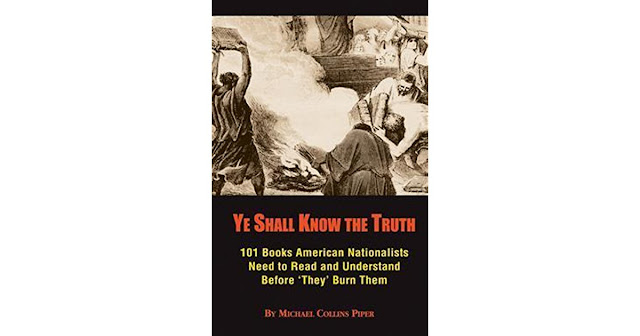 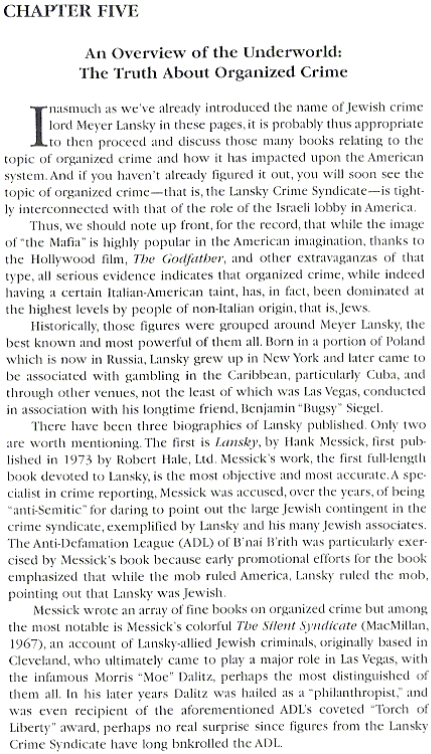 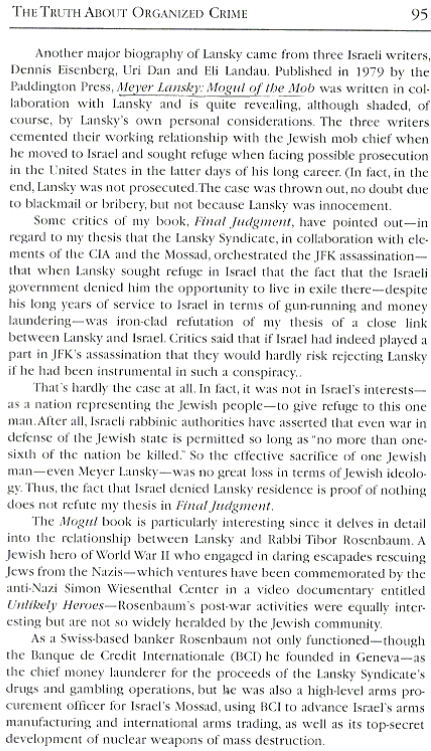 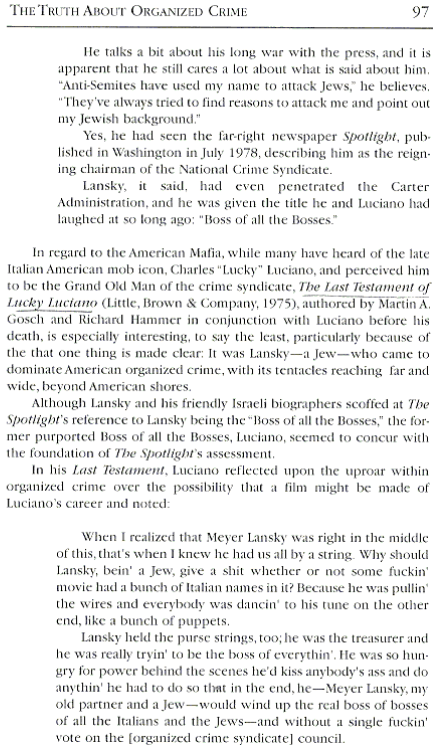 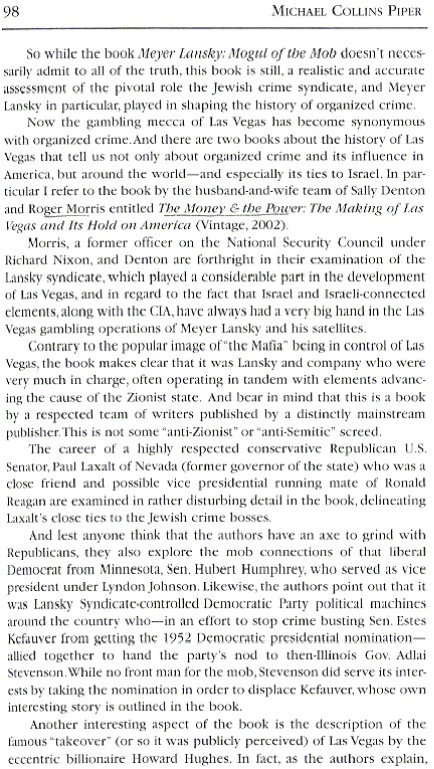 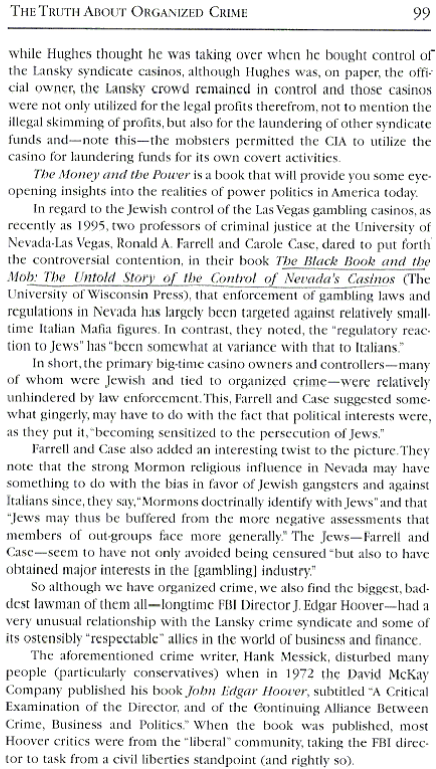 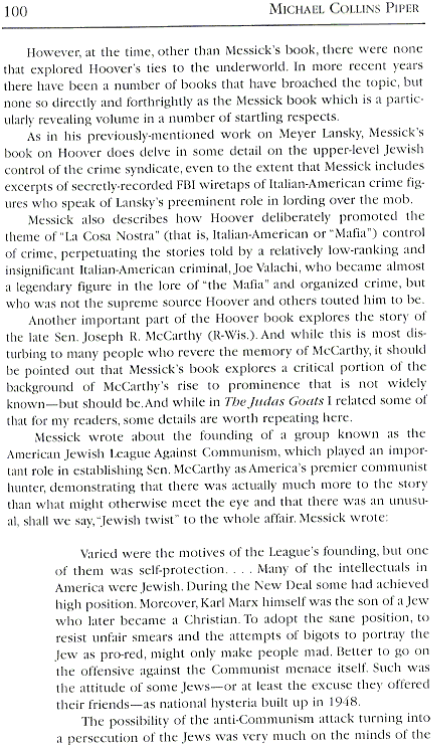 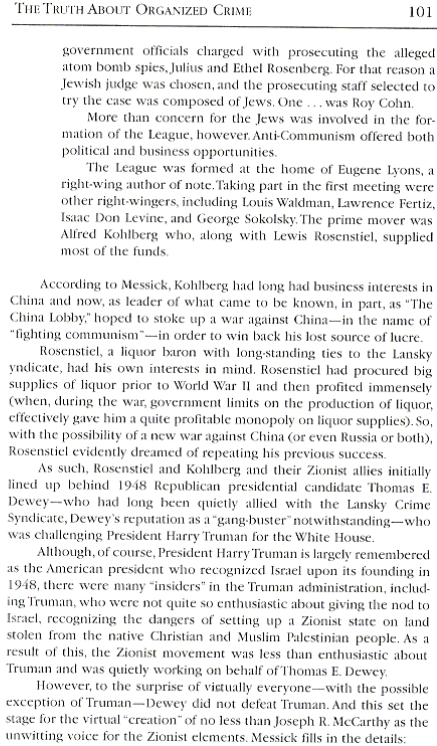 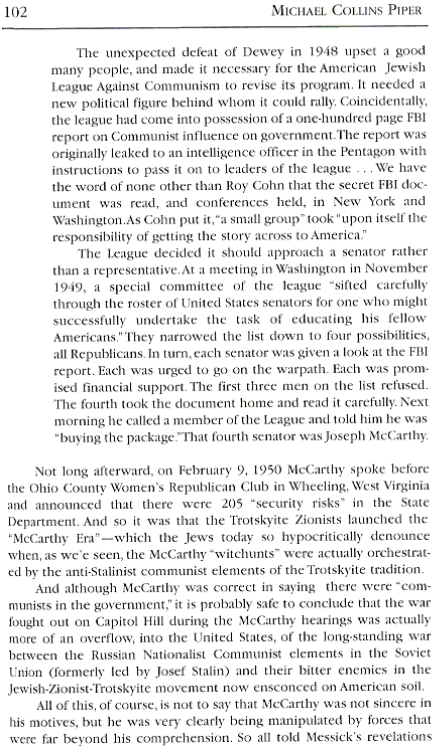 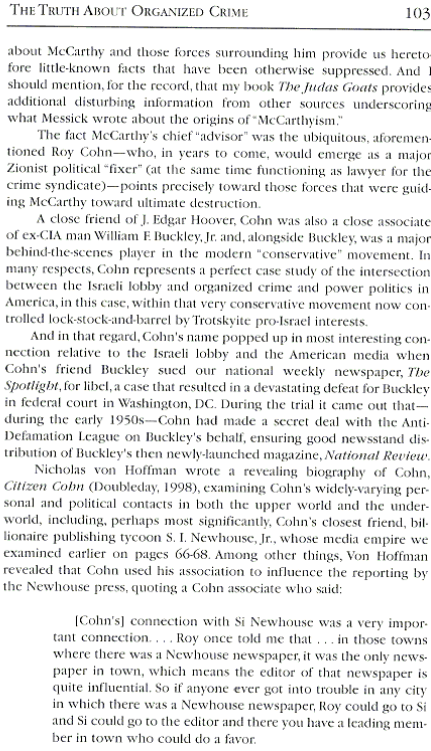 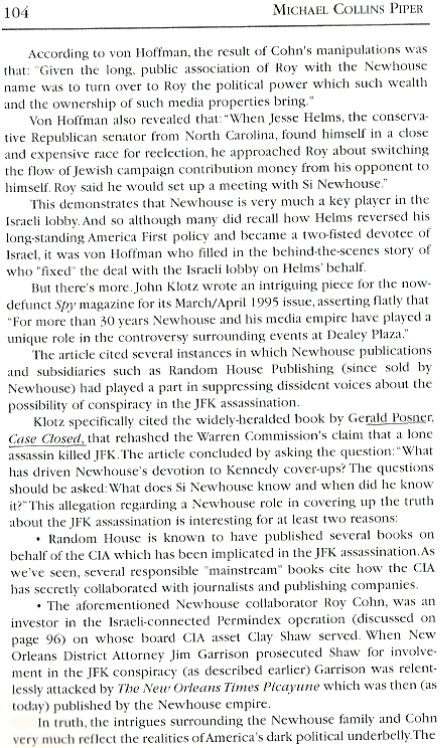 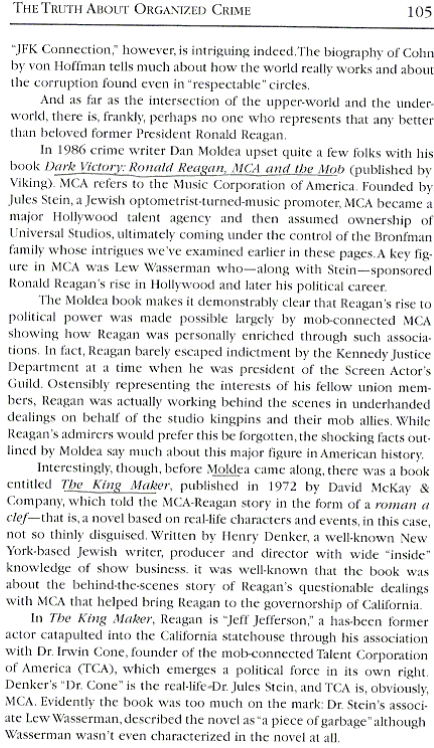 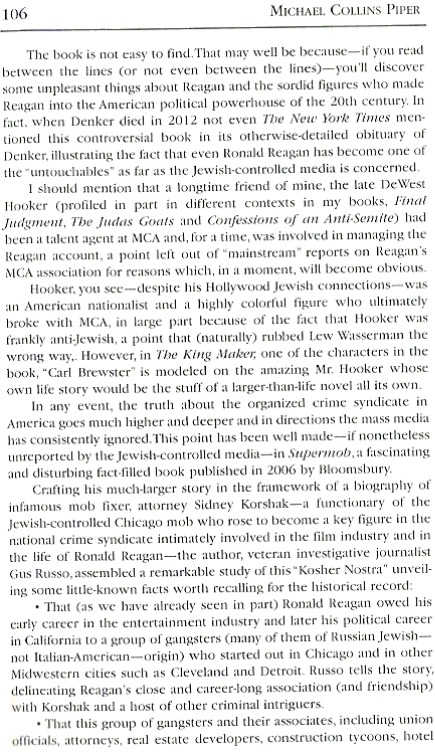 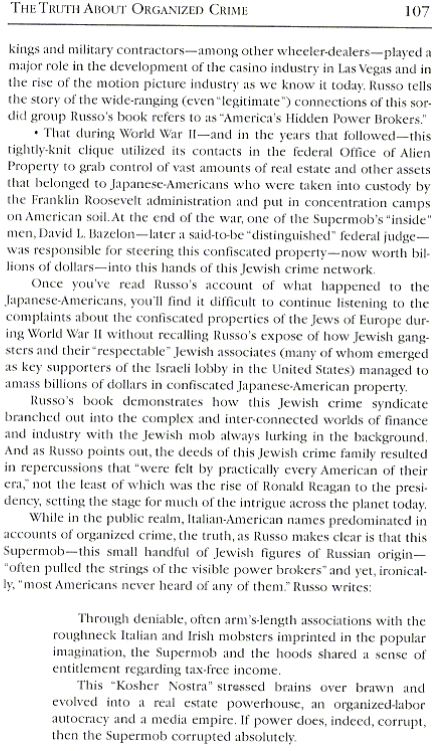 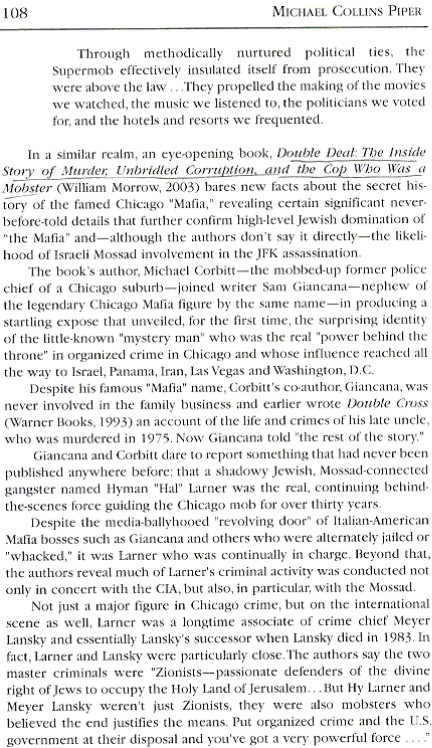 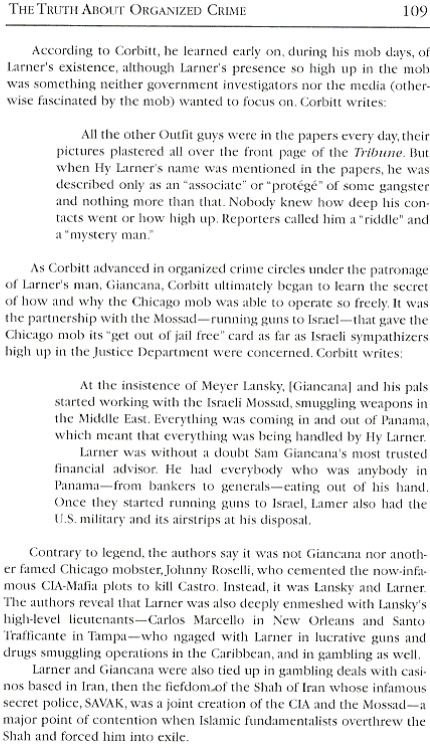 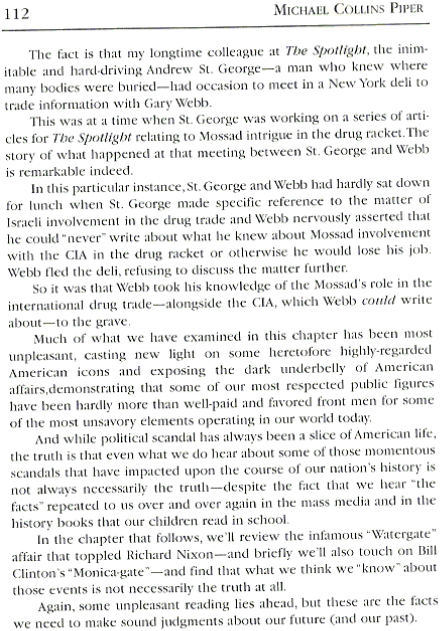 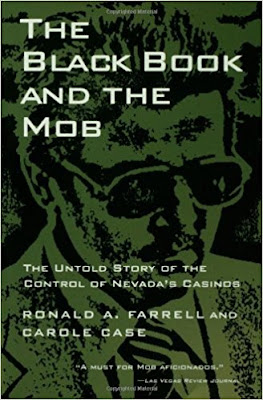