Posted on 24 janvier 2018 by pascasher.the-savoisien.com

« The reception which has been accorded “Our Crowd” shows that the subject was certainly ripe for exploitation. The book has been a best-seller for the past several months; indeed, it has been at the head of the non-fiction list for much of that time. What is more, no one has yet challenged the claim put forward by the book of an exalted social position for Jews. In fact, the opposite has been the case. Louis Auchincloss, who has devoted his talents to the delineation of the WASP upper class of the New York Metropolitan area, has even said that it is hard to understand why “Our Crowd” should only have been the first account of the Jewish upper class. »

The men of our crowd made their fortunes as merchants or bankers or—in the now somewhat antique phrase—as « merchant bankers. » Their business monuments include R. H. Macy  & Company (Strauses), Abraham & Straus (Abrahams, Strauses, and Rothschilds— »the Brooklyn branch » of the European Rothschilds), and a number of celebrated investment and banking houses in Wall Street, including Lehman Brothers; Hallgarten & Company; Speyer & Company; Kuhn, Loeb & Company; Goldman, Sachs & Company; J. & W. Seligman & Company; J. S. Bache & Company; and Carl M. Loeb, Rhoades & Company. Families such as the Lewisohns and Guggenheims, whose fortunes are usually associated with mining and smelting, also maintained banking houses downtown. Some families, such as the Wertheims, moved from manufacturing (cigars) into banking (Wertheim & Company).

For a long time you either belonged to « our crowd » or you didn’t. For several generations the crowd was strikingly intramural when it came to marriage, making the crowd—to the larger crowd outside it—seem so cohesive and tight-knit as to be impenetrable. The « people we visit » became also the people we married. In the first American generation, a number of founding fathers married their own close relatives. Joseph Seligman and his wife were first cousins, and in the next generation Joseph’s brother’s daughter married Joseph’s sister’s son. Meyer Guggenheim married his stepsister, and a Lewisohn married his own niece—and had to go to Europe to do it since such a union was, at that time, against the law in the United States—and as a result of this match he became a great-uncle to his children and his brother’s son-in-law. Three Seligman brothers married three sisters named Levi; several other Seligmans married Walters, and several married Beers. The Seligmans also followed the Jewish practice of offering widows in the family to the next unmarried son, by which process several women became double Seligmans. Double cousinships abound. Seligmans have also married Hellmans, Loebs, Lewisohns, Lilienthals, Guggenheims, and Lehmans; Lehmans, who have married first-cousin Lehmans, have in addition married Lewisohns, Buttenwiesers, and Ickelheimers; Ickelheimers have married Stralems; Stralems have married Neustadts; Neustadts have married Schiffs; Schiffs have married Loebs and Warburgs; Warburgs have married Loebs, who, of course, have married Seligmans.

Today the intermarriage within the crowd presents a design of mind-reeling complexity. » 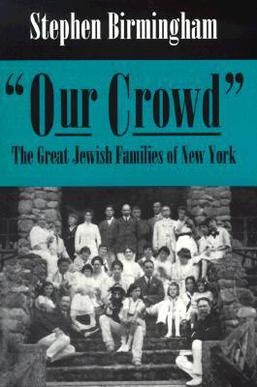 PDF – « OUR CROWD »: THE GREAT JEWISH FAMILIES OF NEW YORK 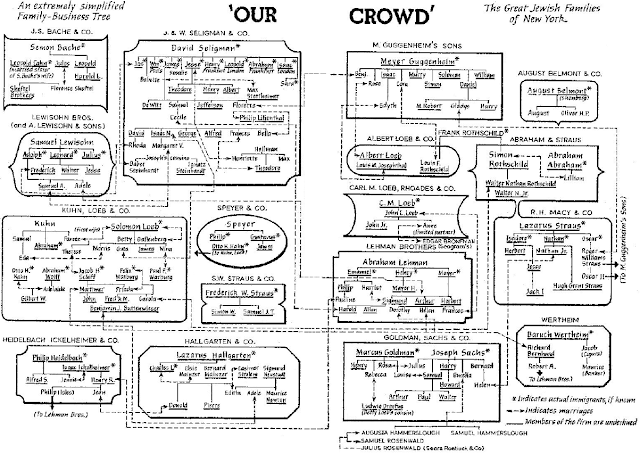 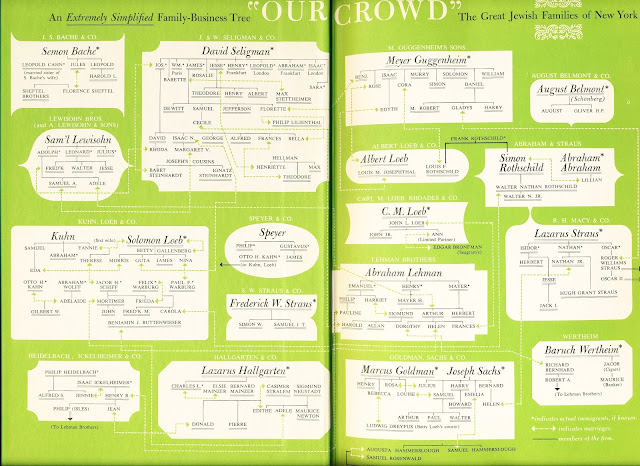