Posted on 21 novembre 2019 by pascasher.the-savoisien.com

Godman, Peter – Hitler and the Vatican: Inside the Secret Archives that Reveal the Complete Story of the Nazis and the Church 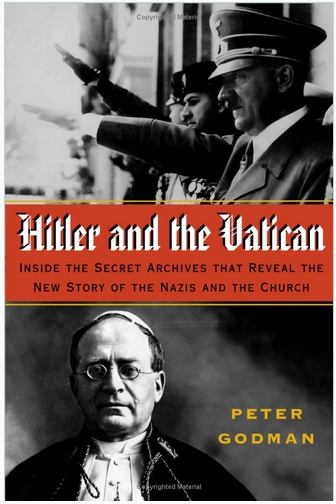 For years, the policies of the Catholic Church during the rise and terribly destructive rule of the Nazis have been controversial. Pope Pius XII has been attacked as « Hitler’s Pope, » an anti-Semitic enabler who refused to condemn Nazism, much less urge Catholics to resist the German regime. The Church has been accused of standing by while the Nazis steadily revealed their evil designs. Yet all such arguments have been based only on sketchy evidence. The Vatican has kept its internal workings secret and locked away from scrutiny.
Until now. In February 2003, the Vatican opened its archives for the crucial years of the Nazi consolidation of power, up until 1939. Peter Godman, thanks to his long experience in Vatican sources and his reputation as an impartial, non-Catholic historian of the Church, was one of the first scholars to explore the new documents. The story they tell is revelatory and surprising and forces a major revision of the history of the 1930s. It is a story that reveals the innermost workings of the Vatican, an institution far more fractured than monolithic, one that allowed legalism to trump moral outrage.
Godman’s narrative is doubly shocking: At first, the Church planned to condemn Nazism as heretical, and drafted several variations of its charges in the mid-1930s. However, as Mussolini drew close to Hitler, and Pope Pius XI grew more concerned about communism than fascism, the charge was reduced to a denunciation only of bolshevism. The Church abandoned its moral attack on the Nazis and retreated to diplomacy, complaining about treaty violations and delivering weak protests while the horrors of religious persecution mounted. As Godman demonstrates, the policies of Pius XII were all determined by his predecessor, Pius XI. The Church was misled not so much by « Hitler’s Pope » as by a tragic miscalculation and a special relationship with the Italian government. Mussolini toyed with the Church, even proposing that Hitler be excommunicated. Yet in the end, when presented with further evidence of Nazi depredations, Pius XI could only comment, « Kindly God, who has allowed all this to happen at present, undoubtedly has His purpose. »
Reproducing the key Church documents in full and quoting verbatim conversations between Pius XI and his bishops, « Hitler and the Vatican » is the most extraordinary look inside the secretive Vatican ever written. 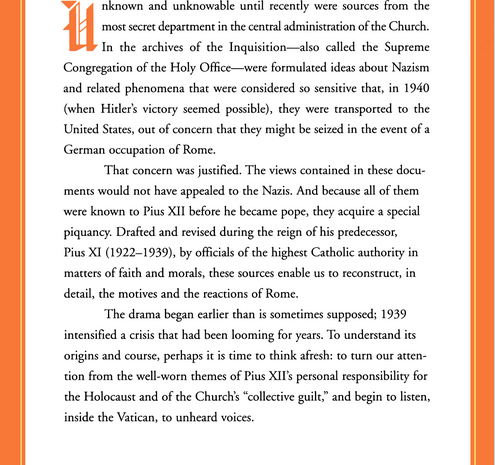 PDF – Brewitt-Taylor, Sam – Christian Radicalism in the Church of England and the Invention of the British Sixties, 1957-1970: The Hope of a World Transformed  This study provides the first postsecular account of the moral revolution that Britain experienced in the 1960s. Beginning from the groundbreaking premise that secularity is not a mere absence, but an invented culture, it argues that a new form of British secularity achieved cultural dominance during an abrupt cultural revolution which occurred in the late 1950s and early 1960s. This moral revolution had little to do with affluence or technology, but was most centrally a cultural response to the terrors of the Cold War, which pitted Christian Britain against the secular Soviet Union. By exploring contemporary prophecies of the inevitable arrival of « the secular society, » Sam Brewitt-Taylor shows that, ironically, British secularity was given decisive initial momentum by theologically radical Christians, who destigmatized the idea of « modern secularity » and made it available for appropriation by a wide range of Sixties actors. Further than this, radical Christians played a significant contributory role in deciding what kind of secularity Britain’s Sixties would adopt, by narrating Britain’s moral revolution as globalist, individualist, anti-authoritarian, sexually libertarian, and politically egalitarian. In all these ways, radical Christians played a highly significant role in the early stages of Britain’s Sixties.

PDF – Connelly, John – From Enemy to Brother: The Revolution in Catholic Teaching on the Jews, 1933-1965 In 1965 the Second Vatican Council declared that God loves the Jews. Before that, the Church had taught for centuries that Jews were cursed by God and, in the 1940s, mostly kept silent as Jews were slaughtered by the Nazis. How did an institution whose wisdom is said to be unchanging undertake one of the most enormous, yet undiscussed, ideological swings in modern history?    The radical shift of Vatican II grew out of a buried history, a theological struggle in Central Europe in the years just before the Holocaust, when a small group of Catholic converts (especially former Jew Johannes Oesterreicher and former Protestant Karl Thieme) fought to keep Nazi racism from entering their newfound church. Through decades of engagement, extending from debates in academic journals, to popular education, to lobbying in the corridors of the Vatican, this unlikely duo overcame the most problematic aspect of Catholic history. Their success came not through appeals to morality but rather from a rediscovery of neglected portions of scripture.    From Enemy to Brother illuminates the baffling silence of the Catholic Church during the Holocaust, showing how the ancient teaching of deicide-according to which the Jews were condemned to suffer until they turned to Christ-constituted the Church’s only language to talk about the Jews. As he explores the process of theological change, John Connelly moves from the speechless Vatican to those Catholics who endeavored to find a new language to speak to the Jews on the eve of, and in the shadow of, the Holocaust.

Review of John Connelly, From Enemy to Brother. The revolution in Catholic teaching on the Jews 1933-1965

Comment by Mike Hoffman: The “Jews” Behind the Second Vatican Council

German History in Documents and Images  « The Jesuit: The Obscurantist without a Homeland. » A Propaganda Pamphlet by Hubert Hermanns (1933) 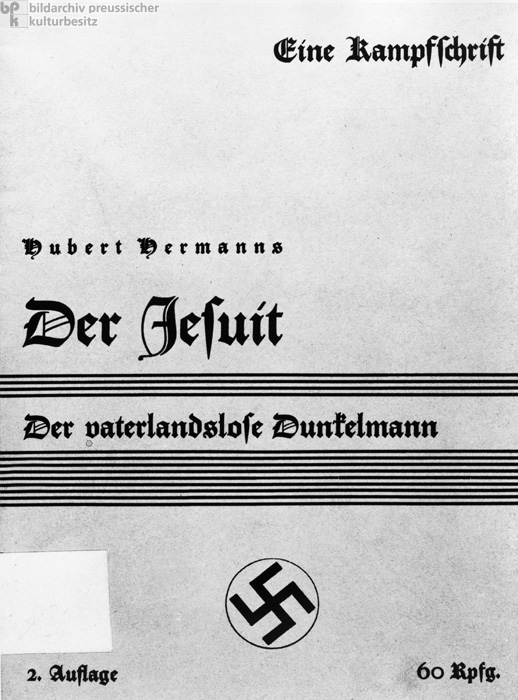 The Nazis declared the Catholic order of the Jesuits « public vermin » [Volksschädlingen] – the same term it used to describe the Freemasons. Its members were persecuted, interned, and sometimes murdered. Conspiracy theories about the Jesuits had circulated since the seventeenth century, and the order had already been banned repeatedly. During the Nazi regime, these conspiracy theories were put in the service of the goal of reducing the influence of the Jesuits, who ran secondary schools and engaged in youth work. Entitled « The Jesuit: The Obscurantist without a Homeland, » this propaganda pamphlet by Hubert Hermann warned against the Jesuits’ « dark power » and « mysterious intentions. »