Posted on 18 octobre 2020 by pascasher.the-savoisien.com 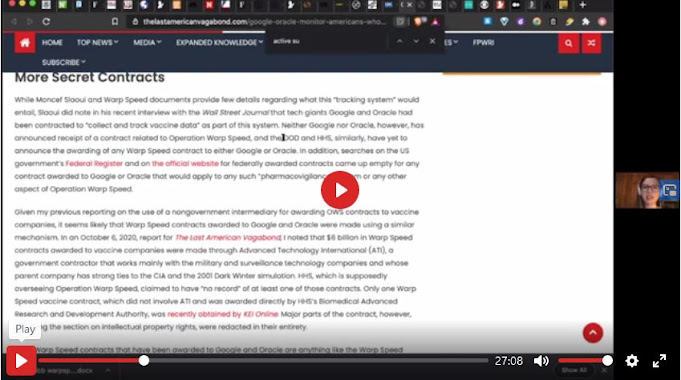 In this interview, investigative journalist Whitney Webb, who does both independent work and collaborations with The Last American Vagabond, discusses the little-known details of Operation Warp Speed, a joint operation between U.S. Health and Human Services (HHS) and the Department of Defense to produce a fast-tracked COVID-19 vaccine and other therapeutics.

• Many of the same surveillance initiatives proposed after 9/11 have been resurrected, with updated technology, under the guise of combating COVID-19

• Operation Warp Speed, the White House Administration’s effort to produce a fast-tracked COVID-19 vaccine and other therapeutics, is almost entirely funded and operated by the CIA and the U.S. military

• Operation Warp Speed is supporting the creation of several COVID-19 vaccines, all of which will be deployed, but to different “critical populations”

• Operation Warp Speed is shrouded in secrecy that makes it difficult to ascertain the true agenda, but part of the plan is to monitor vaccine recipients for 24 months after the first dose using biosensors that record and share biological data

• Like 9/11, the COVID-19 pandemic is being used as justification for the implementation of more tyrannical controls. It appears they’re laying down the infrastructure for a totalitarian control system set to be fully deployed later.

Whitney Webb @_whitneywebb · This pisses me off so much. Warp Speed is shady as hell and now the NSA & DHS are part of it. MSM admits it « looks a lot more like a military operation than a science project. » Top FDA officials are BARRED from sitting in at their meetings.

Whitney Webb @_whitneywebb · NEW at @TLAVagabond According to official docs and the head of Op Warp Speed, every American who gets the Warp Speed Covid19 vaccine will be monitored and surveilled for up to 24 months after the first of what they say will be a multi-dose vaccine Google & Oracle to Monitor Americans Who Get Warp Speed’s Covid-19 Vaccine for up to Two Years Moncef Slaoui, the official head of Operation Warp Speed, told the Wall Street Journal last week that all Warp Speed vaccine recipients in the US

Whitney Webb @_whitneywebb · Moncef Slaoui, the head of Warp Speed, said that tech giants Google and Oracle were contracted for this « tracking system, » but the contracts between Warp Speed and those companies was never announced and appear to be even more secretive than the Warp Speed vaccine contracts.

Whitney Webb @_whitneywebb · This is a HUGE conflict of interest, Google is a major contractor to the US military and, as I’ll be reporting soon, won a new « secret » Warp Speed contract

Whitney Webb @ whitneywebb – There isn’t even an approved COVID-19 vaccine, but Google-owned YouTube will now ban and deplatform those who discuss concerns with any COVID-19 vaccine, including those being developed IN SECRET by Operation Warp Speed (ie the military & big pharma) YouTube bans coronavirus vaccine misinformation

Whitney Webb @_whitneywebb · Yet another CIA-linked Big Tech company has now been added to Operation Warp Speed. Will have an article on this soon.

Whitney Webb @_whitneywebb · YouTube will deplatform you for not trusting corrupt corporations and the US military that are developing a vaccine in secret that is exempt from federal safety regulation, oversight and FOIA requests. It’s vaccines today, could be anything else tomorrow

Whitney Webb @_whitneywebb · Though I’m certainly no fan of the Qanon psyop, this will be used next to deplatform anyone posting something deemed by Silicon Valley or the State to be a « conspiracy theory » | Business Insider @businessinsider · Facebook just kicked QAnon off all its platforms, dealing a massive blow to the conspiracy group http://businessinsider.com/qanon-banned-f

Robbie Martin @FluorescentGrey · Internally on paper pandemic plans for how the Trump admin would deal with covid19 are probably super similar to Bill Gates, it’s funny that people think Trump stands in opposition to that draconian framework esp after his 200,000 vaccines deployed by US military a day comment

Whitney Webb @_whitneywebb · These are Pfizer’s « self-reported » results, Pfizer has a horrible safety track record. The head of the FDA’s CDER is former Pfizer VP for Product Safety that covered up dangerous side effects of Pfizer’s Zoloft and Pfizer tried to block her from testifying under oath about it.

Trump fires Pentagon chief Mark Esper, replaces him with counterterrorism chief By TOI staff and Agencies Defense secretary was critical of US president’s plan over summer to use military to quash civil unrest, recently held talks with Israel over F-35 jet sales to UAE

Whitney Webb @_whitneywebb · 6 nov. New Podcast w @elleprovocateur on the 4th Industrial Revolution and the push for an AI economy We discuss how WEF and its allies have marketed this « revolution » as « sustainable » and « empowering, » while its policies will clearly have the opposite effect. Demystifying the 4th Industrial Revolution with Cory Morningstar | Unlimited Hangout on Rokfin Whitney is joined by independent journalist Cory Morningstar to discuss the 4th industrial…

Darktrace and Cybereason: The Intelligence Front Companies Seeking to Subjugate the World with the A.I. Singularity – unlimitedhangout.com

Whitney Webb @_whitneywebb · This is the worst thing that could possibly happen. Eric Schmidt is a walking nightmare || Jason Kint @jason_kint · Including Google’s Eric Schmidt in a position of influence is prob the most likely stumble this administration could have walking in the door. It would be turning over a critical set of issues in our economy and information sphere to financial influence. https://ft.com/content/44f738e8-eb6f-4394-b833-6b3207ce31bf

Whitney Webb @_whitneywebb · If you want to know what went on here, this is the article you need to read: https://unlimitedhangout.com/2020/08/investigative-reports/meet-the-idf-linked-cybersecurity-group-protecting-us-hospitals-pro-bono/ || SV News e @SVNewsAlerts · BREAKING: Multiple US hospitals have been hit with a “coordinated” cyberattack—days before election. FBI, HHS & Homeland Security’s Cybersecurity Agency warn of more possible attacks.

Whitney Webb @_whitneywebb · A document co-written by CIA InQTel Luciana Borio, recently appointed to Biden’s Covid-19 taskforce, recommends linking Covid-19 vaccination with food security and rent assistance. Want to not be homeless or feed your family? Guess you’ll have to get an experimental vaccine

Whitney Webb @_whitneywebb · Using state intelligence agencies to wage cyber war against sites that investigate Big Pharma corruption is not only troubling for the future of journalism but it suggests that the UK is now openly using its state powers to treat enemies of corporations as enemies of the state.

Covid-19 vaccines may have potentially unpleasant side effects

The Good The Bad And The Utterly TERRIFYING! Warp Speed Watchalong

Whitney Webb @_whitneywebb · Given that these US-UK « cyber tools » were developed for use in the War on Terror and/or by neocons involved in the occupation of Iraq, it is very chilling that this will now be used to deplatform and target news websites that criticize any aspect of an experimental Covid vaccine.

Whitney Webb @_whitneywebb · The US military and the UK’s GCHQ have declared « cyber war » against sites that publish what they deem to be « anti-vaccine propaganda » or « suspected » disinfo re: Covid-19 or a Covid vaccine candidate. US – UK Intel Agencies Declare Cyber War on Independent Media British and American state intelligence agencies are “weaponizing truth” to quash vaccine hesitancy as both nations prepare for mass inoculations,

Michael Osterholm, who’s now been appointed to Biden’s COVID-19 team, was a consultant to the Bush administration’s « investigation » into the 2001 anthrax attacks who helped downplay the possibility that the attacks were conducted by a government insider. http://ph.ucla.edu/epi/bioter/per

Whitney Webb On Warp Speed And Our Warped Reality!

COVID-19 Vaccine Safety Trials Are ‘Designed To Succeed’, Meaning Safety Is Not The Objective

Whitney Webb @_whitneywebb · It’s not « anti-vaccine » to oppose the military, DHS, the NSA, the FBI, Palantir and Google leading and managing the US’ COVID-19 vaccine effort under extreme secrecy. They shouldn’t be the ones leading this, period.

Whitney Webb @_whitneywebb · Told you. Enemies of corporations (in this case Big Pharma) are soon to be enemies of the State Met counter-terror boss calls for action on Covid-19 anti-vaxxers Britain’s top counter-terrorism officer today called for a nationwide debate on the introduction of new laws to punish people who spread anti-vaccination conspiracy theories. standard.co.uk

Knock knock who is there it’s a truck full of soldiers here to elevate a few stock prices || Theycantsuicideusall @cantsuicideus · 18 nov. Hey Trump supporters, explain this? He just said ‘ALL OF AMERICA’. This is happening under Trumps watch, and this was HIS ‘Operation Warpspeed.’

Whitney Webb @_whitneywebb · Palantir was shaped, not just by Peter Thiel and Alex Karp, but the very 2 figures behind Total Information Awareness (TIA) and the former business partner of Christine Maxwell (Ghislaine’s sister) at Chiliad. There is a clear link leading us from PROMIS > Chiliad/TIA > Palantir

#402: Speak Now Or Forever Hold Your Peace with Whitney Webb on Vimeo

Special ID cards | One step away from mandatory vaccination?

Trump is now closing in on and isn’t that far off from reaching 200 amplifications of QAnon-promoting Twitter accounts since the coronavirus pandemic began in the United States. || Alex Kaplan @AlKapDC · Trump this afternoon retweeted a tweet that quote-tweeted a QAnon account.
The Great Reset and The Great Awakening Are One In the Same – The Beast and The Harlot Part 3 – YouTube
Cyber War Declared in U.S. and UK to Quash Vaccine Hesitancy as Nations Prepare for Mass Inoculations • Whitney Webb
We’ve Read The Documents @weve_read · 16 dec. 2020 Polyethylene glycol is an ingredient for the liposome sphere that encapsulates the vaccine mRNA to encode the COVID-19 spike protein is a known allergen. Health worker in Alaska had serious allergic reaction after Pfizer’s vaccine – NYT A health worker in Alaska had a serious allergic reaction after getting Pfizer Inc’s coronavirus vaccine, the New York Times reported on Wednesday, citing three people familiar with reports of the… reuters.com
State of the Union: Dark Winter w/ John Brisson, Mark Kulacz & Recluse
The Darkest Winter – John Brisson on The Farm
Twitter To Remove Tweets Containing Vaccine MisinformationSecond health care worker in Alaska has adverse reaction to COVID-19 vaccine

David Knight sur Twitter : « German magazine cover portrays vaccine as the advent of the Savior of humanity As I’ve said, I don’t think it’s any coincidence that they’re pushing this « gift » at Christmas while doing their best to ban worship of the true Savior #Christmas2020″ / Twitter

Dudes Talking Episode 91 – Off the Cuff with Angel Martin – YouTube

Project Veritas caught Zuckerberg being anti-Trump’s vaxx… David Knight@libertytarian ·16 Feb. 2021  C’mon Mark, Alex Jones didn’t have a problem w mRNA vaccines when TRUMP was pushing #OperationWarpSpeed He told everyone Trump’s mRNA vaccines were saving us and keeping the « dangerous Gates » vaccines away I know. I was there. I was fired for criticizing « 4D Chess » Bull || Mark Dice@MarkDice· 16 Feb. 2021. « Basically, Mark Zuckerberg admits he agreed with Alex Jones on concerns about the mRNA COVID-19 vaccine in this new Project Veritas video, but later changed his mind. »

-Zuckerberg opposed it b/c it was Trump’s vaccine

-Alex Jones supported it b/c it was Trump’s vaccine

#BigPharma held it off until Trump lost

WE are the ones who lost